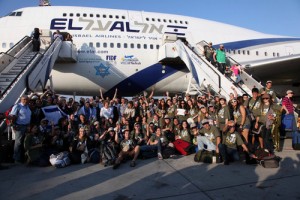 A new report shows that Jewish immigration to Israel from around the world rose more than 40 percent in the first three months of 2015, the UK’s Guardian reported on Sunday. A total of 6,499 Jews arrived in Israel between January and March of this year, according to an interim report by the Jewish Agency for Israel. The vast majority of immigrants came from Europe, specifically eastern Europe. 1,971 immigrants came from Ukraine to the Jewish state, the most of any country […]