You are here: Home / Holocaust / “Shadows of Shoah” delivers Truth with Dignity!
Spread the love

I met professional photographer Perry Trotter a few years ago in California and we instantly became friends. I was very impressed with his creative talent, but what affected me the most, was Perry’s genuine love for Israel and the Jewish people. Perry is not Jewish and in a constantly growing anti-Semitic world, a real friend of the Jews is a rare find.
That is why when Perry first talked to me about project Shadows of Shoah, I was very curious at first, but quickly my curiosity turned into a deep respect for such a project. The more I got involved with Shadows of Shoah, the more touched I became by Perry and Sheree Trotter’s work on the Holocaust. They present truth, light and hope, and they do it with dignity, as each story is one of a unique individual and not another sad statistic. They help us to remember the 6,000,000 as real people; something that much of the Holocaust work to date hasn’t always been very successful at.
Shadows of Shoah is a beacon of truth. In a world where the Jewish people are a constant target, it is so encouraging to see and hear the truth about the Holocaust. The lie being sold to the world is that the Holocaust was grossly exaggerated and in some cases completely invented. In all cases, the number 6,000,000 is never agreed upon. Holocaust deniers and historical revisionists alike would love to see the “Jewish Catastrophe” disappear from history books all together, and they could succeed if postmodern tolerance and political correctness win the battle. This is why projects like Shadows of Shoah are so critical.
Shadows of Shoah presents the truth about the Holocaust. It is neither dramatized nor romanticized. The stories come from first-person interviews with survivors of the Shoah across the world. Considering the fact that fewer and fewer survivors are still alive today, there is a sense of urgency in the Trotters’ work. As first-hand witnesses continue to disappear, the “Catastrophe” runs a greater risk of falling into oblivion.
As you view the many testimonies filmed by Perry and scripted by Sheree (Perry’s wife) from personal interviews with the survivors, the simplicity of the presentation brings out the profound reality of the Shoah. Each survivor has his/her own ordeal to recall and relive in front of the camera and they do it with difficulty but with dignity.
It gives the audience a sense of hope based on mankind’s resilience. These people who came out of the Shoah as survivors are still with us, telling their story and letting us know that after they survived the horrors of the camps, they chose to live and to share. Perry and Sheree have become catalysts for such a cause. They bring truth, light and hope into a world that too often lacks all three. 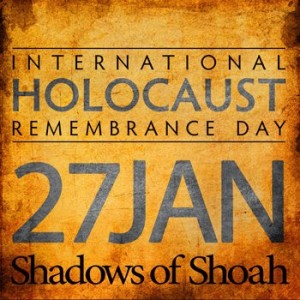 On January 27, 2014, the United Nations will commemorate International Holocaust Remembrance Day. This date is different from the Jewish commemoration of Yom HaShoah that takes place each spring. It is an event sponsored by the United Nations. I am grateful that the UN would take on such a task on a yearly basis. Over the years, I have lost faith in the ability or even the willingness of the UN to deal with Israel fairly. UN Secretary General Ban Ki-Moon’s statement about this event says: “Denying historical facts, especially on such an important subject as the Holocaust, is just not acceptable. Nor is it acceptable to call for the elimination of any State or people. I would like to see this fundamental principle respected both in rhetoric and in practice by all the members of the international community”. I couldn’t agree more, yet I often feel that a double standard is applied to Israel and such a statement–I am afraid–might just be a string of words empty of any real meaning.
Nevertheless, the Trotters have started a campaign to familiarize people with Shadows of Shoah so they are posting a different 3-minute testimony every other day of January until the 27th. Each story is short but impactful, succinct but life-changing. It is my prayer that many people, starting with my readers, would take the time every other day of January to view these powerful testimonies and share them with many of their friends through emails and social media.
The post-Holocaust Jewish motto of NEVER AGAIN can only be achieved if people like us take the time to show the world that we care. Shadows of Shoah does exactly that, and it accomplishes the task with simplicity, dignity and depth. Perry and Sheree Trotter who identify themselves as Evangelical Christians are post-Holocausts righteous gentiles and I thank God for them.

In all their affliction He was afflicted,
And the angel of His presence saved them;
In His love and in His mercy He redeemed them,
And He lifted them and carried them all the days of old
Isaiah 63:9
2,404