You are here: Home / Israel / We must apologize to JEWS and to DOGS!
Spread the love
After I wrote on Mr. Falk’s awful entry in his personal blog about Israel, and today I feel it necessary to update my entry and further clarify why his apology was more of a disgrace than his original offense.
As I previously reported, on June 29, U.N. Special Rapporteur on Human Rights in the Palestinian Territories, Richard Falk posted a cartoon on his personal blog (see below) 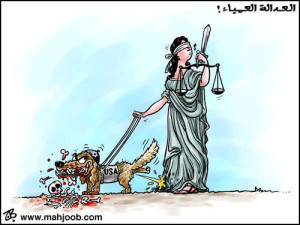 The cartoon was from an Arabic site and clearly depicted America as an Israeli influenced dog wearing a yarmulke (skull cap) with a star of David and peeing on blind justice. When confronted by leaders of Jewish organizations like the ADL, Mr. Falk pulled the cartoon of his site and offered a half-baked apology and also said that his poor eyesight made him think that the yarmulke was a helmet!
I say half baked because in his own words, he said that he didn’t think that the cartoon was antisemitic, and I quote:
“With apologies, I realize that the cartoon that originally appeared on my blog devoted to the arrest warrants for Qaddafi and two others issued by the ICC had strongly anti-Semitic symbolism that I had not detected before it was pointed out to me. I posted the cartoon to express my view that double standards pertained to the American and ICC approach to international criminal accountability. As soon as I was made aware of the anti-Semitic content of the cartoon I removed it from my blog, although initially I denied such a posting because I did not realize that it was anti-Semitic and was mistaken as to what was being referred to.
Additionally, Mr. Falk also apologized to animals, as if dogs and Jews had been mutually insulted by being compared to one another. So when I think about it, I don’t know what is more antisemitic: the cartoon itself of the awkward apology to Jews and animals?
His pathetic attempt at backpedaling only succeeded in more embarrassment as he added:
“Beyond this, if we are to have a sustainable human future we must also make peace with nature, and treat animals with as much respect as possible…

Nazis used to compare Jews to vermin worthy of being crushed to death and Islamists describe Jews as pigs and apes. has Mr. Falk joined their ranks, at least philosophically, by implying that Jews and dogs were hurt in his comments. How ridiculous is that?


Mr. Falk (a Jew himself) is by his own admitting a strong critic of Israel’s policies, comparing Israelis to the new Nazis of the middle east. He would most certainly agree with a cartoon from 2009 depicting Palestinians as the new victims of the “Israeli holocaust”, a lie that the world is buying from Islamists and liberals alike. 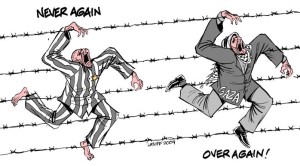 So the question remains:” Is the U.N. so insensitive to Israel and the Jewish people that they don’t even see the antisemitism in the cartoon that was published or are they so indoctrinated by liberal pro-Palestinians and so blinded by political correctness, that they really believe that Israel is the enemy?
One reassuring thing though, is that Israel is viewed with favor in God’s eyes and if you ask me, God’s view of Israel is what matters, and He has promised to never destroy her. So, I will side with the God of Abraham, Isaac and Jacob and love Israel and my people and I will do anything to expose the lies of those who hate “the apple of God’s eye. May God have mercy on them and may they find peace in the Prince of Peace, Yeshua of Nazareth.
Help Us by Sharing