I am aghast to see how fast the world is succumbing to global dhimmitude (subjection to sharia) while liberal factions and the media are trying to sell us on the concept that for the most part radical Islam is a minority problem. Of course, when radical Islam is proven to be the catalyst behind the latest terrorist attack (bus, embassy, school…you name it!), the right thing to do is to respond immediately, but not in kind because after all, the West doesn’t comprise savages, so we better respond with an apology for the damage that radical Muslims have inflicted upon our western civilization. After all if Islam has become radicalized, it is only because they were forced into it out of despair for an unattainable self-determination. In other words, we are forcing them into it! Right?
Dhimmitude can be forced or voluntary, and while in many countries where Islam is the majority ideology, people have little choice but to comply with sharia or lose a limb or two if not their life, there is still a myriad of places where dhimmitude is a choice, and my question is: “why in the world would anybody want to submit to a retrograde ideology taking us back to the middle-ages”? I am puzzled!
I am so tired of hearing people telling me that Islam is a “religion of peace”. Dhimmitude feeds the beast of Islamic hatred as it keeps growing to a size that will soon engulf the whole planet. 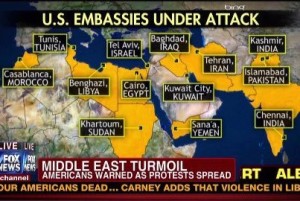 The last couple of weeks have seen a  resurgence of violent activity worldwide aimed at embassies with no sign that the carnage will stop, as we approach the Muslim Friday prayers again, a new wave of attacks could very well erupt.
This could possibly become a global intifada (uprising) against not only America “the Great Satan”, but other countries in Europe and the rest of the world. Of course, Israel is always a prime target but never the sole target of radical Islam, also keeping in mind that Israel must be understood as a broader term for ALL JEWS of the world. So much for a peaceful religion!

• A False Premise
The release of a short movie that depicts Islam and the prophet Mohammed in less than favorable light has propelled radicals to the streets once again, demanding apologies for insulting their prophet. The making of the movie, the director as well as funding, remain cloaked in a shroud of mystery. One thing that is starting to emerge though, is the fact that the response to the movie (which by the way was published several months ago) was more of a planned violent attack than a reactive defense of Islam and its prophet. Christians don’t kill when Yeshua (Jesus) is mocked. Jewish people don’t kill when Moses is ridiculed. Only Muslims threaten to behead you if you speak poorly of the prophet of the religion of peace. Freedom of speech is not an option. Heck, forget freedom of speech or freedom of press, FREEDOM IS NOT AN OPTION IN ISLAM!
France is also under attack for publishing another issue of “Charlie Hebdo” satirical magazine depicting Mohammed pushed in a wheelchair by an orthodox Jew (based on a very successful recent movie “the untouchables”). Protesters all over the Muslim world marched the streets, burned flags and shouted “Death to America, Death to France”. While I do not read “Charlie Hebdo” by personal choice, I recognize the right to satirical publications, especially in France where the art form goes back several centuries. Imams have the right to demand an apology if offended, just like the Jewish community has the right to demand an apology if a synagogue is firebombed, a cemetery is desecrated or public property defaced. But, please let’s not kill one another over this!

• An Enemy by Proxy
Those who fall into dhimmitude, being in Europe, in North America or anywhere else in the “still civilized world” become enemies of Western Civilization by proxy. They might not behead their neighbors or burn the house next door but they increasingly facilitate this final push that Islam is making to take over the world. They might still be choosing to do so blinded by their one-sided tolerance, yet, soon they will not have a choice anymore as THEY will have become the victims of their own political correctness.
I am ashamed to say that America is at the forefront of this politically correct dhimmitude virus that now is spreading faster that I even thought possible. The current administration is doing very little to stop the endemic global radicalization of Islam. On the other hand, we seem to help them infiltrate all levels of our schools, government agencies, political parties and media outlets. I wonder if the libelous statements of “Jewish control” of the banks, the media, the political scene and Hollywood will survive the Islamic invasion? Well, it probably will since THE BLAME IS ALWAYS ON THE JEWS!
Our president is not exempt, as he chose to appear on David Letterman Late Night Show (nothing against Letterman) instead of meeting with Prime Minister Netanyahu. Additionally, the state Department is currently working with the Organization of Islamic Cooperation to promote a new resolution (Resolution 16/18) prohibiting speech that incites violence. Of course, we can most certainly expect that resolution to be bathed in double standards. In an appearance after the embassy bombings in Cairo and Libya, President Obama stated that: “there is no religion that condones the targeting of innocent men and women”. I beg to differ Mr. President. You should look into this “religion of peace” more carefully!
AFTER ALL THERE IS NO SUCH THING AS RADICAL ISLAM BECAUSE “TRUE” ISLAM IS NOTHING BUT RADICAL!
It is my conviction that Muslims who claim to be moderate simply are cultural Muslims who loosely apply the Qur’an to their daily lives if at all.

• The only Master worth serving
In the Great War against the West currently being waged by Islam, Israel is only bootcamp training. We all are next on the agenda. An agenda that has already been put in motion by the way! So if anybody, even for a moment, thinks that Israel is the problem in the Middle East and that Jews must be stopped so that peace can prevail, they are definitely the ideal candidate for a dhimmi.
As for me and my house we will serve the Lord (Joshua 24:15)
If I am going to be a dhimmi or a “protected subject”, I want to be a subject of the King of Kings and Lord of Lords, because of His love and Grace for me, for all those who are lost and that includes all Muslims. Yeshua (Jesus) is the ONLY WAY FOR ALL (John 14:6)