You are here: Home / ISIS / ISIS: The Exponential Growth of a Pandemic Threat!
Spread the love

By now, there are not that many places in the world where the acronym ISIS (Islamic State of Iraq and Syria) or ISIL (Islamic State of Iraq and the Levant) remain unknown.  ISIS also known as IS (Islamic State) has acquired quite a ruthless, bloody reputation in just a few months. When it was first announced that they were a splinter group from Al-Qaeda, we witnessed an almost “tongue-in-cheek” yet blasé reaction from most people. Little did we all know about the rapes, crucifixions and beheading that were about to take place. Now we know and yet, very little is being done to nip ISIS in the bud. The bold Caliphate declaration by Abu Bakr al-Baghdadi on June 29, 2014 ( the first day of Ramadan) was a surprise to most, but it remained unchallenged. It is a long shot to expect the rebirth and growth of an Islamic caliphate, but we must remember that even if the Third Reich was short lived, it decimated millions in its destructive path.
To be sure, Islamo-fascism wasn’t born yesterday. It has plagued much of the Middle East for decades and has even spread beyond on many occasions. Much of modern terrorism has been Islamo-fascist terrorism. By this I do not mean that all Muslims are terrorists, absolutely not! Yet, if we were to tally up the terrorism of the last fifty years, almost every terrorist WAS a Muslim.
But is ISIS a terrorist group or is it even much more than that? While it is clear that their actions totally fall in line with terrorism, we must also understand that as a declared caliphate–albeit not officially accepted–they are not acting as a terrorist organization within a state or country. ISIS is not like Hamas, Hezbollah, Boko Haram or even Al-Qaeda. By their own admission, they are a state and because of that, they qualify for a response proportionate to their barbaric, brutal attack on Western civilization. They qualify for a full-blown retaliation. No sanctions, not boycott, no talks… RETALIATION! Let me clarify what I mean, I mean war! ISIS IS ACTING AS A TERRORIST STATE and not a terrorist organization! An all out war against ISIS on the ground might be the best use of resources and the only way to put an end to this slaughter.
ISIS is very impressive and attractive to a myriad of radical Islam aficionados (Muslims or not). ISIS has managed to attract followers from various corners of the planet with their supremacist ideology “hell bent” on beheading the infidels. We shouldn’t underestimate the danger posed by this new group’s ability to attract previously uninterested people to Islam. They have an uncanny ability to draw people to their evil ideology that is what makes them a real but very unpredictable danger.
Al-Qaeda, Hezbollah, Hamas and many other terrorist groups always had a following, but because of their lack of organization, lack of funding and lack of “proper” exposure, they always were partially successful at best. ISIS has mastered all three. They are organized. As a matter of fact they have a structure that is more akin to a government with a military wing than that of a terrorist group.
They have a pretty steady cash flow that now comes from some of the oil fields they have seized recently. Some statistics say that they might be generating between $1M and $4M daily. No matter how we look at it, they generate much more than any of the other terrorist organizations including Al-Qaeda.
As for their exposure, they get it from videos and brochures distributed as if they were running an advertising campaign, and in a sense they are! They also have an extremely strong presence on the social networks.
ISIS has been planting cells all around the world and continues to do so. Additionally, in countries like the Netherlands, Belgium and the UK, they have been recruiting on the streets through a process known as Da’wah meaning “invitation”. People are invited to inquire about Islam and even convert through dialogues on street corners. As a result, almost every country in Europe has seen people join Islamic training in Syria and/or Iraq. 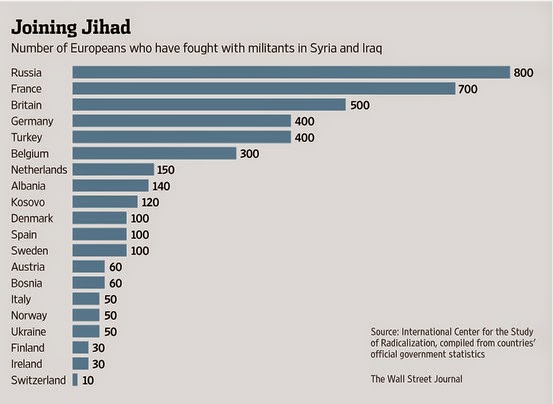 ISIS has declared jihad against the whole world. But how did they get so far, so fast? It can be argued that the vacuum created by the removal of dictatorial leaders in the Middle East is what made room for groups like ISIS. The Saddam Hussein, Qaddafi and Mubarak of the region might have been ruthless dictators within their own restrictive police states, but they also managed to keep a lid on Islamic extremism. Now ISIS is quickly filling the void.
ISIS’ exponential growth continues both territorially and demographically. They are not only expanding their borders in the Middle East, but they are also establishing their following globally. From their standpoint of a global caliphate, they are successfully establishing a network while the world is watching like a deer in headlights.
While ISIS poses a threat to all, including Israel, they currently are focusing on “purging” Islam of all the Shi’ite Muslims who stand in the way of their establishing their hegemonic caliphate. This, of course, doesn’t mean that Israel is currently unaffected by ISIS, but simply that they, as a target, might be on the back burner. There is no doubt in my mind that if ISIS gets too close to Israel and puts the Jewish state at risk, Mr. Netanyahu will respond swiftly and appropriately.
So, as the Ebola virus continues to spread in Africa and is even starting to affect other continents, the ISIS virus appears to also be spreading in and beyond the Middle East. From isolated to epidemic to pandemic, the ISIS virus could do a lot more damage before it is contained, but it will never be contained with band aids or compresses. Major surgery is needed and fast.
It is time for civilized people to unite against the Islamic State. It is also time for the more liberal among us to realize that ISIS is the new Nazis of the Middle East, not Israel!
In the meantime, all of us who believe in the power of prayer know what to do. We must:
• Pray for the United States to quickly and powerfully go after ISIS and incapacitate them
• Pray for the safety of those within the destructive path of ISIS
• Pray for ISIS members to be released from the bondage of Islamism

The Lord is far from the wicked but He hears the prayers of the righteous (Proverbs 15:29)