Home » Blog » Remember the Holocaust Lest We Repeat History!
Spread the love

On April 19th also known as the 27th of Nisan on the Jewish calendar (8 days before Israel’s Independence Day), the worldwide Jewish community will commemorate Yom HaShoah (literally, the Day of the Catastrophe).
While there is no standardized Jewish way to mark this solemn day, Jewish people around the world make a point to remember the memory of their loved ones in various ways. Israel will have all flags at half mast starting on the eve of Yom HaShoah, as well as a siren blast at 10 AM on the day of, for the whole country to come to a stop for 2 minutes. Additionally, a myriad of other official gatherings in synagogues, community centers and even in public arenas, will occur. 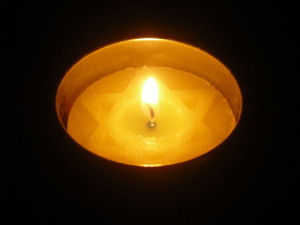 For the rest of the world, Jewish communities will join spiritually by attending special services at the local synagogue where the memory of the victims, known or unknown, is brought to the attention of the community. It is not unusual to have a Holocaust survivor come an speak at such gatherings as well as have people read an endless list of names representing a small section of the 6,000,000 Jewish victims.
The important part is the accurate propagation of the memory of “the Catastrophe” more than the method by which it is done.
We must understand that all genocides and attempts at ethnic cleansing are crimes against humanity that must be brought to justice. This being said, the Holocaust was a very unique event in the history of mankind, as it was the ONLY GENOCIDE that included a very thorough and meticulous system to exterminate European Jewry by hunting Jews down in most countries and bringing them back to the Death Camps for extermination. Escaping was near impossible and surviving was no small miracle!
In April of 1945, as Nazi Germany was in collapse and World War II was nearly over, General Eisenhower and some American troops captured the German Camp of Ohdruf (a sub-camp of the extermination Camp of Buchenwald). While it would take the world weeks if not months to fully grasp the full dimension of the Shoah, within a week, Eisenhower requested for other officials and for members of the press to come to Ohdruf and witness the horrific crimes that he had just come in contact with. As Eisenhower saw it, it was critical to gather as many eyewitnesses as possible in order to perpetuate the memory of the Holocaust and preserve the facts as facts. On page 223 of the book Dear General: Eisenhower’s wartime letters to Marshall, He was quoted saying:“I made the visit deliberately, in order to be in a position to give first-hand evidence of these things if ever, in the future, there develops a tendency to charge these allegations merely to ‘propaganda.'”
Eisenhower compiled a report including pages upon pages of written evidence and thousands of pictures based on his personal experience, in hope to document the unspeakable and prevent it from happening again.
Unfortunately, and against his heartfelt desire of keeping a painful but necessary memory alive, the Holocaust has been suffering at the hand of deniers, who prefer being known as “revisionists”. They range from mild to severe in their attempt at delegitimizing the Holocaust and making it into exactly what Eisenhower was fighting against: “Jewish propaganda”. The deniers can be found within Islam, liberal westerners and even in some rare cases among self-loathing Jews.
On the eve of Yom HaShoah, I will not lower myself by listing the names of any of those who call the Holocaust a hoax, a Jewish propaganda or a “hick-up of history”, simply because they do not deserve my attention.
These individuals do exist around the globe and as the survivors of the Shoah are rapidly disappearing from our world, these hateful Shoah negationists are gaining momentum. While it is still vastly unpopular to deny the events of the Shoah, I fear the day when political correctness will switch sides on the issue of the Shoah, and it will become unpopular to “offend” anybody with the ” dubious retelling” of the single most heinous crime against humanity.
The Shoah was not a hoax, propaganda or a hick-up of history!
The 6,000,000 Jews who perished were all individuals with potential!
One of them was Maurice Weinzveig my grandfather who perished in Auschwitz!
In their memories and in the memory of the rest of them I will remember Yom HaShoah

“For the dead and the living, we must bear witness.
For not only are we responsible for the memories of the dead,
we are also responsible for what we are doing with those memories”
Elie Wiesel