Home » Blog » Jews are Greedy, Aren’t They?
Spread the love

WOW! try to tell a joke like this about Muslims and you get street riots and embassy protests around the world. Do it on African Americans and Al Sharpton and Jesse Jackson hold hands, marching on the streets and protesting against racism. Do it on the Jewish people….and it;s a funny joke…This reminds me of the greedy Jewish merchant Shylock depicted in William Shaekaspere’s “The Merchant of Venice”. (see illustration below) 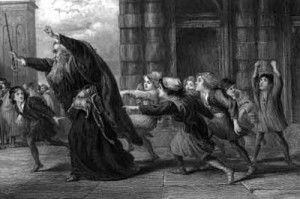 As it appears, stereotypes never go away they just get recycled into more contemporary jokes and diatribes. What a sad reminder of the human nature. (click here for video of the joke).
2,041