This last week, just when I thought that moral debasement had reached an all time low, once again and to my great dismay, I was proven wrong.
Just a few days ago, the Estonian gas company GasTerm Eesti used a picture of the Auschwitz Nazi death camp entrance stating “Arbeit macht frei” (Work makes you free) on their website with the caption: “Gas heating–flexible, convenient and effective”. In all fairness to them, after they received several complaints from various sources, they decided to pull the photo and issue a statement of apology.
This being said, who in his right mind would want to associate ANYTHING to the stigma of the infamous Auschwitz photograph? Let alone a commercial for gas! This was done with such bad taste that I thought we had reached a record low in human depravity. But wait, it actually gets worse! For this, we must travel 5,000 miles south east of Estonia to Ahmedabad, India.
Rajesh Shah is the young co-owner of a brand new clothing store where he sells Western men’s wear. T-Shirts, shirts, jeans and other iconic fashion elements from the West. I always salute entrepreneurship, but in this case, I must make an exception. 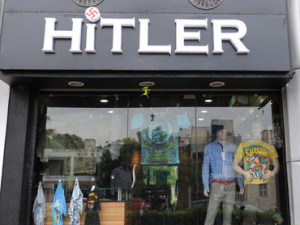 The entire branding of his store (storefront, letterhead, cards, logo, etc) bear the word: HITLER with a swastika in a circle as dot on the i of HITLER.
This raises the question of why would anybody want to use the name Hitler to sell anything unless they are promoting neo-Nazi paraphernalia? To this question I only see two possible answers: Ignorance or defiance.
It is part of who I am to give anybody the benefit of the doubt before I draw any conclusions. so, I will look for any validity in Mr Shah’s claim of ignorance.
Mr Shah claimed that until he opened the store, he really didn’t know too much about Hitler and his legacy.  He also stated that it wasn’t until then that he found out about the 6,000,000 people that Hitler killed. Apparently, Shah’s partner had a grandfather who was so strict that he was nicknamed “Hitler”, thus the name for the store.
This would definitely be an unfortunate choice if it was true. But is there truly a younger Indian generation who knows NOTHING about Adolph Hitler? I find this hard to believe! Not to mention the fact that if the name HITLER was used without premeditation and without prior knowledge of the dictator’s legacy of blood and hatred, why in the world would the “i” be dotted with a swastika?
I can already see defenders of Mr. Shah quickly come to his rescue and mention that the symbol originated in India and that maybe he was simply adding an Indian touch to his logo? It is correct that the swastika (meaning “to be good” in Sanskrit) originated in India and goes as far back in history as the period known as Classical Antiquity (8th -7th Century B.C.). This being said, we must also note that the Indian rendition of the symbol is always upright (forming a square) and NEVER TILTED (forming a diamond). The tilted swastika was adopted by the Nazi party (either clockwise or counter-clockwise). And it is of course the tilted one that Mr. Shah chose to use.
Maybe he was not aware of the subtle difference? I sincerely doubt it, especially in light of the additional comments he made about the choice of HITLER for his branding as he went on to defend his choice for such a name:
“None of the other people are complaining, only a few families. I have not hurt any sentiments of the majority Hindu community. If he did something in Germany, is that our concern?”
I feel pretty confident that ignorance can be ruled out and this only leaves one other reason: Defiance. Mr. Shah feels that he has not offended the majority of his people. What about the rest of the world? What about the Jewish community? Have we become so narrow-minded and self absorbed that we only care about our immediate community? Yet Mr. Shah is educated enough to know Western culture and its fashion industry. Does he suffer from selective ignorance or careless defiance?
Mr. Shah most certainly saw some shock value in such a name. He claims that he will change the name only if compensated for his expenses. I don’t see much remorse in that statement!. This also comes from a country where Hitler’s biography “Mine Kampf”  is still popular in bookstores and amongst street vendors.
What I see here is a tremendous lack of sensitivity and human decency at best, and defiance against the Jewish people (not to call it anti-Semitism) at worst.
Any way you look at it, Mr. Shah is only paving the way for more insensitivity towards Jewish people and the Holocaust. At a time when survivors of the Shoah are dwindling away, such a position is only reinforcing the liberal agenda of Holocaust deniers, something that we can certainly all do without.
Mr. Shah is the exact reason why I will continue to be vocal about such insensitive displays. To educate, speak up and take action.