You are here: Home / Blog

On April 6, The Wall Street Journal published an article entitled:” Anti-Semitism and the Economic Crisis Many people still blame Jews for capitalism’s faults.“.
Following are some excerpts worth considering:

There are ample indicators of current anti-Semitic attitudes. A poll conducted recently in Europe by the Anti-Defamation League found 74% of Spaniards believe Jews “have too much power in international financial markets,” while 67% of Hungarians believe Jews “have too much power in the business world.” Here in America, the Web site of National Journal is hosting an “expert blog” by former CIA official Michael Scheuer, now a professor at Georgetown, complaining of a “fifth column of pro-Israel U.S. citizens” who are “unquestionably enemies of America’s republican experiment.” And over at Yahoo! Finance, the message board discussing Goldman Sachs is rife with comments about “Jew pigs” and the “Zionist Federal Reserve.”

So will the Jews come under attack? The existence of the Jewish state guarantees refuge for Jews around the world, but it carries with it its own risks. Hezbollah’s leader, Hassan Nasrallah, has said that if the Jews “all gather in Israel, it will save us the trouble of going after them world-wide.” It’s a comment all the more chilling as Nasrallah’s Iranian sponsors are on the brink of making a nuclear bomb….
….It may yet be that the Jews escape the current economic crisis having only lost fortunes. But if not, there will have been no lack of warning about the threat. When Jews gather Wednesday night for the Passover Seder, we will recite the words from the Hagadah, the book that relays the Israelite exodus from slavery in Egypt: “In every generation they rise up against us to destroy us.” This year, they will resonate all the more ominously.

It is refreshing to see some of the press expose the blatant lies about the Jewish people controlling the finances of the world. The age old libel against the Jews, painting them as rapacious, greedy, money gathering people, needs to be exposed as a lie. There is nothing new and nothing true about the attempt by worldwide Jewry to take over the world. 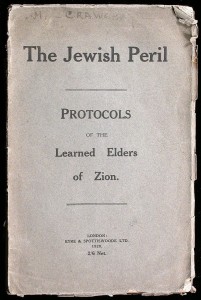 In the late 1800s, The Protocols of the learned Elders of Zion was first published. It has since been proven that it is a fabricated hoax, infused with blatant plagiarism by Russian journalist Matvei Golovinski.

It is hard to tell how far the world will be willing to go in accusing the Jewish people of greedily controlling the planet, but as the sames diatribes are being spread, I cannot help but see a stage being built, or REBUILT I should say, for a world leader to incite the masses into hating my people.

A global crisis, a desperate world community, a charismatic leader and a scapegoat! the set is being built under our eyes and most people are still either closing their own eyes or looking the other way.

Sir Winston Churchill’s quote profoundly resonates in my heart: “A nation that forgets its past is doomed to repeat it.”

Let’s stand against the liers and their cohorts. Remember the past, so we won’t we repeat it!

The Jewish paper Ha-aretz just reported that anti-Semitism is on the rise again in Europe. Their findings show that acts of an anti-Semitic nature for the first quarter of 2009 have surpassed all of 2008 in numbers. Countries such as Belgium, Finland, Denmark, Holland, England and France have shown a critical surge of anti-Semitism in response to the Gaza conflict of late December 2008/January 2009. Additionaly, the financial collapse doesn’t help the situation as Ha-aretz remarks:

The report cites the reaction to January’s Israel Defense Forces operation in Gaza as one of the key triggers of anti-Semitic attacks against Jewish communities in Europe. In addition, the current financial crisis is giving rise to age-old anti-Semitic stereotypes suggesting “Jewish control of the global financial system.”

EJC members from all over Europe, who gathered in Brussels for the special session, reported a significant rise in the number of anti-Semitic incidents. The head of the Jewish community in Finland, Rony Smolar, said its 25,000 members are subject to repeated harassment due to its support for Israel.

“Public opinion links Israel with the local Jewish community, which turns us into enemies,” Smolar said, adding that his country has seen “a dramatic rise” in the number and severity of anti-Semitic attacks. Smolar said that Molotov cocktails have been thrown into synagogues and that Jewish cemeteries in Sweden and Norway have been vandalized. He also cited a shooting incident in which two Israelis were wounded by a gunman in Denmark during Operation Cast Lead.

“Cartoons likening the Star of David to the Nazi swastika have become commonplace in Scandinavia,” Smolar said.

The Jewish people have been the scapegoats of humanity for centuries. Any local, national or global crisis will eventually incite some people to shift the blame on Israel and/or the Jewish people. It was only a matter of time before we were blamed for the economic crisis. Saddly, as the article reports, political correctness forces people to shy away from exposing the real problem.

I stand with my people all across the globe. I suffer great pain when I witness the repeated acts of anti-Semitism, or any racism for that matter. the plea of Asaph in Psalm 83:1-5, resonates deep in my heart:

O God, do not remain quiet; Do not be silent and, O God, do not be still.
For, behold, Thine enemies make an uproar; And those who hate Thee have exalted themselves.
They make shrewd plans against Thy people, And conspire together against Thy treasured ones.
They have said, “Come, and let us wipe them out as a nation, That the name of Israel be remembered no more.”
For they have conspired together with one mind; Against Thee do they make a covenant:

Judea Pearl, who is a professor at UCLA and the president of the Daniel Pearl Foundation has written an article in “The Cutting Edge News” on March 30. It is a challenging and thought provoking article on the differences between Anti-Zionism and Anti-Semitism. following is a short excerpt:

“… anti-Zionism is in many ways more dangerous than anti-Semitism.
First, anti-Zionism targets the most vulnerable part of the Jewish people, namely, the Jewish population of Israel, whose physical safety and personal dignity depend crucially on maintaining Israel’s sovereignty. Put bluntly, the anti-Zionist plan to do away with Israel condemns five and a half million human beings, mostly refugees or children of refugees, to eternal defenselessness in a region where genocidal designs are not uncommon.
Secondly, modern society has developed antibodies against anti-Semitism but not against anti-Zionism. Today, anti-Semitic stereotypes evoke revulsion in most people of conscience, while anti-Zionist rhetoric has become a mark of academic sophistication and social acceptance in
certain extreme yet vocal circles of U.S. academia and media elite. Anti-Zionism disguises itself in the cloak of political debate, exempt from sensitivities and rules of civility that govern inter-religious discourse, to attack the most cherished symbol of Jewish identity.
Finally, anti-Zionist rhetoric is a stab in the back to the Israeli peace camp, which overwhelmingly stands for a two-state solution. It also gives credence to enemies of coexistence who claim that the eventual elimination of Israel is the hidden agenda of every Palestinian.
It is anti-Zionism, then, not anti-Semitism that poses a more dangerous threat to lives, historical justice and the prospects of peace in the Middle East.”
Full link to article (http://www.thecuttingedgenews.com/index.php?article=11224&pageid=16&pagename=Opinion)

In his article, Judea Pearl seems to clearly delineate several differences between the two AND claim that the most dangerous is Anti-Zionism. I am far from convinced that the two can be completely separated and additionally, I believe that Anti-Semitism is at the root of Anti-Zionism.
The complete destruction of Israel would not bring the rest of the Jewish people worldwide to a safe place, while the complete cessation of anti-semitic acts and sentiments would preserve Israel AND also the diaspora Jews.
So, to be sure, BOTH Anti-Semitism AND Anti-Zionism must be fought and defeated and BOTH will require us to stand up and speak against them.

Racism is man’s gravest threat to man – the maximum of hatred for a minimum of reason.
Abraham Joshua Heschel

On wednesday, March 25, satire cartoonist Pat Oliphant, released his latest contribution (see cartoon below) in anti-semitic diatribes in the form of a cartoon showing s a headless figure goose-stepping while pushing a large Star of David with fangs and pursuing a tiny woman carrying a child labeled “Gaza.” The syndicated cartoon appeared in newspapers around the world.

Liberals continue to paint a negative and damaging picture of Israel and the Jewish people.
It is not uncommon to hear Israel’s foes describe her as the “New Nazis of the Middle east”.
Oliphant’s cartoon adds fuel to the fire of anti-Semitism. It is a lie and a disgrace.
Lies like those propagated in such a cartoon have were part of the tools used in Nazi propaganda 70 years ago to satanize the Jewish people. If we don’t voice our disgust over this kind of libel, we run the risk of once again becoming by-standers while our people are getting massacred.
Let’s pray that God gives us the boldness to speak up!

Item #2 on the agenda was being discussed:”Freedom of expression and advocacy of religious hatred that constitutes incitement to discrimination, hostility or violence”.
When you watch the short video found at
http://europenews.dk/en/node/21155
you will see Mr Littman being interrupted in the middle of his presentation.
You quickly realize that when it comes to Human Rights, there appears to be a double standard.
Muslim anti-Semitism is a clearly a forbidden topic at the United Nations.
Does it seem like Israel and the Jewish people are not receiving a fair treatment or am I way off?