Home » Blog » Will the Paris March Against Terror only be a Historic Day?
Spread the love 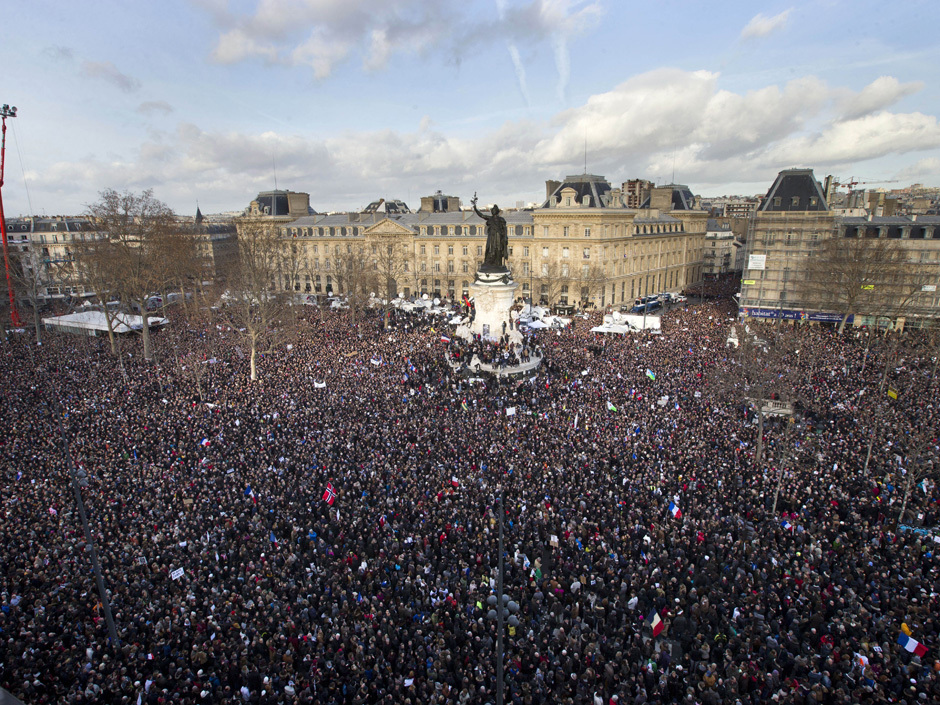 After three horrific days of unprecedented terror in Paris resulting in the death of 17 innocent victims, the City of Lights was the center of a historic event on Sunday, January 11, 2015. Within about 48 hours, a solidarity march was organized by the French government, hoping to rally its citizens under the banner of unity and freedom of expression. What took place on Sunday was much bigger in so many ways. It was history in the making!

The French government admitted that it was extremely difficult to gauge how many people really participated, but at the end of the day they had agreed that the number was about 4,000,000 all over France with probably about 1,700,000 in Paris alone. The Paris Freedom March was the largest gathering of people on French territory for a single cause, ever! It was even larger than the Liberation of Paris in 1945.

Security was of course a huge concern, considering that about 50 heads of state were present at the march. How much can really be organized in 48 hours in the midst of an ongoing crisis? There was obviously a huge risk factor and the various heads of state present were all aware of it. They came anyway. At least most of them, although President Obama’s absence was an embarrassment and a message in and of itself. Even Attorney General Eric Holder who was already in France couldn’t be spotted in the crowd. In a very negative way, America also made history on Sunday!

Fortunately, in addition to the French marches, many other countries showed their support by having gatherings of their own. French President François Hollande rightfully said: “Paris is today the capital of the world”. Logistically speaking, the Paris March made history.

But beyond the variety in the march’s composition, it must also be noted that politically speaking the march was an incredible amalgam of ideologies. Nationally, all those who could be there were there, from the left to the right, including previous french presidents such as Nicolas Sarkozy. They were participating in a very apolitical protest against terrorism, anti-Semitism and in support of freedom of expression.

Internationally, it was probably the largest concentration of heads of state outside of a funeral for another head of state or monarch. Leaders in attendance came from Britain, Germany, Italy, Spain, Ukraine to name just a few European countries, as well as many African countries. Of course, it was also impossible to ignore the presence of both Benjamin Netanyahu and Mahmoud Abbas in the front line of the march. On any given day, most of the countries and political parties represented in Paris would disagree on a lot of issues, but Sunday was the day to agree against Islamo-Nazism and its barbaric ideology. Politically speaking, the Paris March made history.

The streets of the capital were filled with people from all religious walks. We could see Muslims and Jews marching together, accompanied by Catholics, many other faiths and even atheists. The march was serving several purposes under the banner of fighting terror. The Friday Kosher Market hostage crisis claiming the lives of four Jewish victims made France realize that anti-Semitism is alive an well within its borders. It was time for France to admit that whatever they had tried in the area of tolerance, integration and appeasement was a huge failure. Previous President Sarkozy already knew that after the carnage of the Toulouse Massacre in 2012.

But in the midst of a very anti-Semitic community, France still produced some heroes like the young Muslim from Mali, Lassana Bathily, who decided to hide all the customers he could find in the downstairs–refrigerated room at the Kosher Market. Several Jewish hostages were saved because of this young Muslim.

The day ended with a service at the Grande Synagogue de Paris packed with Jewish worshippers as well as people from other faiths, in support of all the victims and of the Jewish community. President Hollande, Mr. Netanyahu and the Paris Imam among others were all present at this moving service where the French national anthem La Marseillaise was sung as if to signify that the gathering was going well beyond the memory of the four Jewish victims, and it was. Religiously speaking, the Paris March made history.

But the question remains in the hearts of French people and especially within the French Jewish Community: “Will the march be remembered as a Day of unity against terror or will it it be the catalyst of something much bigger”? “Will the French government, in cooperation with the other countries of the European Union, enforce existing anti-terrorism laws as well as adjust others and create the ones that are still needed”? The Jewish community doesn’t have much hope that this wake-up call will actually empower the country to continue fighting against extremism.

French Jews are scared to go shopping, or go outside wearing Jewish garb or even sending their children to Jewish schools. As a result, we have seen a mass exodus from France to Israel in the last few years with 7,000 in 2014 alone.

French Prime minister Manuel Valls said: “France without its Jews isn’t France anymore”. I agree with him, even though I am not sure that he fully grasps the meaning of his statement. So, today, much remains on the table for French politicians who showed that even for a day they could agree to fight for freedom of expression and speak against anti-Semitism and terrorism. Not just France, but the whole world needs to press on and stand up against radical Islam.

No matter what follows, Sunday January 11, 2015 will always be remembered as the Paris March against Terror. But for the future of mankind in general and that of Jewish people in particular, France and the other countries present at the event should not loose their momentum of unity and dedication.

On Sunday, France led the free world in showing us how to stand-up against the cancer of extremism, but we all know that diagnosing cancer is pointless if you don’t aggressively attack the disease. Tomorrow will tell!