Home » Blog » What unites the Left more than its disdain for Trump?
Spread the love 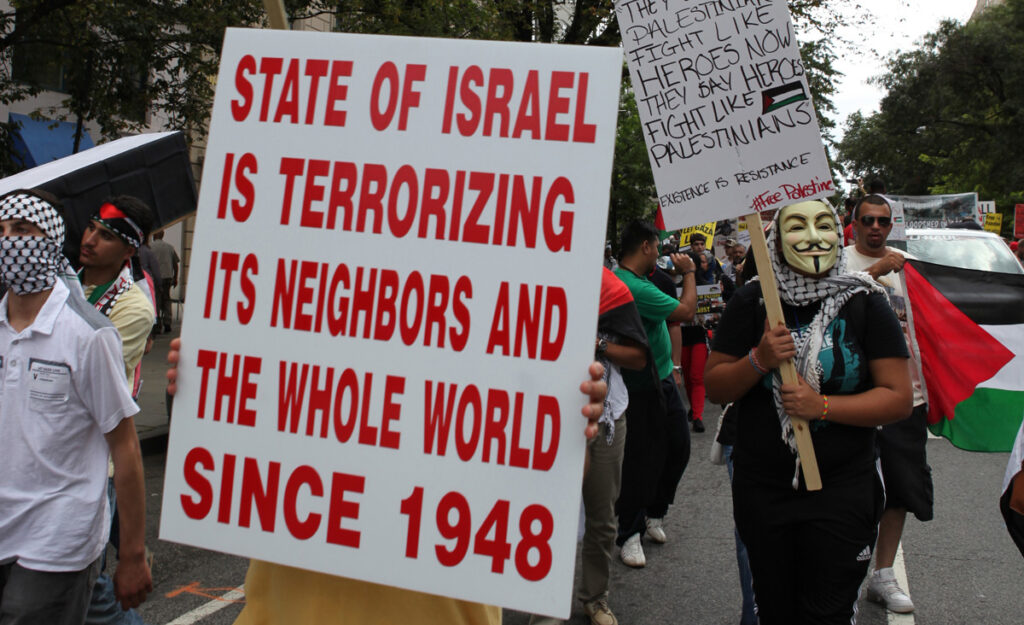 It doesn’t take a rocket scientist to realize that America’s political landscape is suffering from the worst case of polarization in its history. The amount of hatred for President Trump currently displayed by his opponents is mind-boggling. Republicans and Democrats used to be somewhat cordial even when disagreeing. They even found ways to advance and promote the United States in a bi-partisan way. Everything seems to indicate that these days are gone. Yet, there is something else that unites the Left even more than their disdain for Trump, it is their hatred for Israel and the Jewish people. It doesn’t always appear to be that bad, but under a thin veneer of social justice and multiculturalism, antisemitism is quickly identified.

One of the most asked questions, when I speak around the United States, has to do with the American Jewish community’s apparent support of the Leftist agenda. With a puzzled look on their faces, people often ask me to explain why so many Jewish people vote Democrat. I must say that as a Jew, I don’t categorize myself as either a Democrat or a Republican. Yet, I would tend to be very conservative. This being said, I could have voted for a Democrat like JFK back in the days, but Democrats of yesteryear are a far cry from today’s Left.

So what makes Jewish people in America vote Democrat? First, the Republican party often appears to be the party of “Right-wing bigots” or “white supremacists.” It is often thought to be a party that aligns itself with the political agenda of Nazi Germany, and we all know how that played out for 6,000,000 Jews. Incidentally, the Nazi Party or “The National Socialist German Workers’ Party” had “Socialist” in its name. To this day, its adherence to a Socialist agenda is widely debated. Hitler might have used the word “Socialist” to attract people to a  movement that would end-up becoming a totalitarian, genocidal party closer to Fascism than Socialism. Instead of looking at what we call a political spectrum with moderate in the center of Left and Right, we need to consider a full circle with Left and Right getting closer together the further they move away from the moderate center. Eventually, they meet on the other end of that circle. Let’s face it, extreme Right and extreme Left promote a lot of the same agendas.

Another reason why Jews vote Democrat is that the more liberal agenda of the Democrats appeals to the Jewish community at large–at the very least to the 85%+ who are not religious. The issue is that to the non-religious Jews, social justice is more important than Israel, Jewish identity or even Jewish survival. Jewish identity used to be connected to a feeling of belonging to Israel one way or another. Support for Israel was much stronger from American Jews a couple of decades ago. It appears that the non-religious Jewish community finds more solace in supporting any sort of social justice agenda rather than supporting Israel. In the process, they seem to ignore–willfully or not–that the Left is anti-Israel, period! Consider the following:

• Democratic candidate Elizabeth Warren recently said she will “reverse President Trump’s policy decisions on the Israeli-Palestinian conflict to restore aid to the Palestinians, resuming support for the U.N. agency that assists Palestinian refugees and inviting a Palestinian envoy back to Washington.” She completely ignored the way that the Palestinian leadership goes about things ie: Rocket launching out of Gaza and other acts of terrorism.

• The liberal Jewish organization J Street met recently for its eighth annual conference where they clearly pushed the idea that the USA should withhold aid to Israel to promote peace in the Middle East. Many of the current Democratic candidates for 2020 were present and in support of that move. As JTA reported J Street president Ben-Ami said “assistance to Israel could be checked against, for instance, the Arms Export Control Act, which requires U.S. arms sales to be used strictly for self-defense.” Well, is there still any doubt–at least in the minds of people of goodwill– that Israel is always acting in self-defense, only retaliating because of acts of terrorism, but never initiating acts of terror?

• Bernie Sanders (a Jew) declared that he would rather have some of the money the USA gives to Israel be re-routed to Gaza. He said, “My solution is, to Israel, if you want military aid you’re going to have to fundamentally change your relationship to the people of Gaza,” he said. “I would say that some of the $3.8 billion should go right now to humanitarian aid in Gaza.” What for, Mr. Sanders? More rockets, more tunnels or more money to reward the families of homicide bombers? Incidentally, for reasons that totally escape me, Muslim feminist activist Linda Sarsour has become Sanders’ campaign surrogate. Somebody needs to explain to her that the words “Muslim” and “Feminist” are oxymoronic at best unless she is a trojan horse slowly making her way into the American political landscape. Consider the concept of taqiyya where it is OK for a Muslim to lie to “gain the upper-hand over an enemy.” This obviously does not mean that all Muslims are deceivers, but rather, that some in powerful positions have agendas that are unethical and as a result, make a bad name for the rest of the Muslim community.

A lot more could be said to make a case against the Left’s antisemitic agenda. Overwhelming growing support for BDS (Boycott, Divestment and Sanctions) against Israel for “occupation” and “colonization” of “Palestine” is a recurring problem based on hearsay. Campus indoctrination of our youth against Israel, known as “Campus Intifada” is also going rampant. Are we becoming responsible for raising a new generation of Jew-haters?

At the end of the day, the Leftist antisemitic agenda–albeit not always physically violent–encourages those on the fringe of society to act against Jewish people in America and the rest of the world. Physical harm resulting in death is now a recurring very alarming theme for the Jewish global community. America has long been the friend of Israel, based on our Judeo/Christian common heritage. Biblically speaking, Israel remains in God’s program and will never be destroyed (Jeremiah 31:35-37), but too many on the Left have little regard for God or His Word. While it is not always a black and white proposition, I still think that it is time for American Jews to consider moving away from the party that wants them dead and join the party that understands Israel’s right to exist in her ancestral biblical land.