Home » Blog » What Everybody Is Missing in Their Definition of Antisemitism!
Spread the love 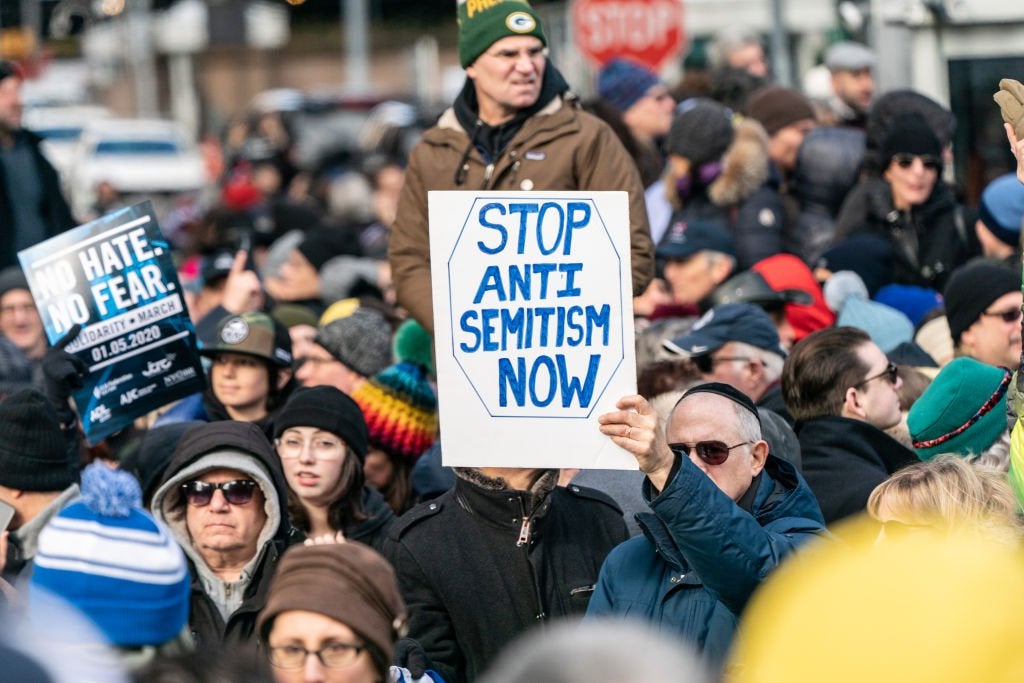 I have been studying, teaching against and writing about antisemitism for almost 22 years. It has become a fight that I cannot abandon, for the sake of my people. It didn’t come naturally to me. For the first forty years of my life, my frustrations and fears related to the longest hatred were somewhat suppressed. I particularly remember growing in France and hearing my parents rehash memories of the war, the Holocaust and how much the world hated us. My mother in particular, always told me that when I was making new friends at school, I should tell them that we are Jewish so that there wouldn’t be any late “surprises.” It always rubbed me the wrong way, but I was oblivious to the fact that my mother saw her dad taken by the Gestapo when she was 16 to only learn much later that he died in Auschwitz-Birkenau. I now understand this scarred her deeply, and it was a scar she bore until her very last day on this earth.

Then, in 1999, I started to gather data on the resurgence of antisemitism for a research paper while I was working on a degree. Twenty-one years later, I am still gathering data, and teaching in churches and conferences on that very topic more than ever. My research gave birth to three books on the topic, and, sad to say, antisemitism doesn’t show any sign of stopping. As a matter of fact, there isn’t one week when I do not have something to report or write about.

Early on, I felt it was necessary to define antisemitism. Not that it had never been done before, but since it has been morphing over the years, it really needs to be fine-tuned. I found many definitions that I felt were adequate, and for a while, I adopted the one from Edward H. Flannery from the classic volume The Anguish of the Jews. His definition is “Antisemitism is attitudes, words or actions that embody a hatred or contempt of the Jewish people as such.” Frankly, no definition is flawless, especially when it comes to explaining a hatred against the Jews that has lasted millennia.

Eventually, I developed my own, which was close to that of Edward Flannery. For close to a decade, I defined antisemitism as “Antisemitism is the hatred of the Jewish people, characterized by thoughts, words or deeds against them.” I felt that it was important that if someone simply had negative, denigrating, or destructive thoughts about the Jews, that it had to be labeled as antisemitism. Their thoughts might never evolve to words or deeds but could easily be the soil in which more active Jew-hatred could grow.

As I continued to study and gather data, I started to realize that my definition was missing something. I noticed that more and more antisemitic acts were committed by people joining forces against Israel, Zionism, and the Jewish people globally. The odd aspect of this team effort was that some of these people working together to ostracize and demonize the Jews would never agree on anything ideologically if it were not for their common hatred of the Jewish people. The adage “the enemy of my enemy is my friend” was really coming to life. How could we possibly imagine Liberals agreeing with radical Islamists, except of course if it is about the need to stop the Jews from “taking over the banks or the world.”

So, I saw the need to add one word to my definition. The needed word was “irrational” as in the “irrational hatred” of the Jewish people. It is irrational on two levels. First, because it joins different groups of people who ideologically would never even think of teaming up, but also because what the world is believing about the Jews and Israel increasingly becomes more irrational each day that passes. Thus, I revised my definition to read “Antisemitism is the irrational hatred of the Jewish people, characterized by thoughts, words or deeds against them.”

How else could people in 2021 still believe the lies about Jewish people using blood to make Passover matzah? Who can still believe that Jewish people need to kill Christian babies during Holy week? Who can still read the now-debunked 1904 hoax The Protocols of the Learned Elders of Zion and believe it to be a true plan to take over the world by a Jewish cabal? What about the medieval Black plague supposedly started by the Jews poisoning the wells of Europe, which logically (read “irrationally”) makes them instant prime suspects for the creating and spreading of COVID-19? More people than you think, across the globe, are still buying into those irrational lies. All these lies are vivid illustrations of the irrationality of the “New” antisemitism. It is not new as in “better”, rather it is new as in “morphed” into something more dangerous and more acceptable to the many who do not check facts.

A bit after I felt the need to adjust my definition, the International Holocaust Remembrance Alliance came up with their own definition of antisemitism in 2016. They posit that “Antisemitism is a certain perception of Jews, which may be expressed as hatred toward Jews. Rhetorical and physical manifestations of antisemitism are directed toward Jewish or non-Jewish individuals and/or their property, toward Jewish community institutions and religious facilities.” In order to help people to understand and adopt that new definition, the IHRA added eleven bullet point items to further define what they meant, and they still call their definition a “non-legally binding working” definition. While I agree with that definition, I find it a bit vague, which explains the need for all the subpoints and examples. I strongly believe that it lacks the irrational component that became evident to me within the last decade.

Then, in the first quarter of 2020, a new group of scholars in antisemitism studies and related fields got together and penned the Jerusalem Declaration on Antisemitism (JDA). They have over 200 signatories. Their definition goes like this, “Antisemitism is discrimination, prejudice, hostility or violence against Jews as Jews (or Jewish institutions as Jewish).” I like the fact that they identify antisemitism as animosity against “Jews as Jews” which is similar to Edward Flannery’s definition of “contempt of the Jewish people as such.” It reinforces the idea that antisemitism makes no sense at all.

While I will not pretend to be familiar with all the signatories of the JDA, I cannot agree with some of their conclusions, especially point 14 of their guidelines (longer than those of the IHRA). It states that “Boycott, divestment and sanctions are commonplace, non-violent forms of political protest against states. In the Israeli case, they are not, in and of themselves, antisemitic.” While I am not against the ethical use of boycott, divestment and sanctions, the BDS movement against Israel and the Jewish people is anything but ethical. It only targets Israel and Israeli products and corporations when there are many countries that commit crimes against humanity and are completely ignored. The sole targeting of Israel justified by fabricated stories shows the hypocrisy of such a movement. Not to mention all the Israeli products and inventions that BDS proponents use daily, turning a blind eye on the “Jewish Apartheid State” out of convenience. I cannot agree with a definition that doesn’t see BDS as antisemitic.

All these definitions, good and bad are lacking a key component that must be seen as the root of antisemitism, and that is the spiritual element. I don’t expect everyone to believe in God or even have any spiritual leanings, but I believe that without the spiritual component, antisemitism cannot be fully understood, and even less combated.

There is no doubt in my mind that Satan is at the core of antisemitism. For those who don’t believe that Satan exists, this will make my argument difficult to accept but bear with me.

From the moment he got involved with humanity Satan showed his true colors. He is THE deceiver who hates all that God loves and loves all that God hates. It might come as surprise to many, but Satan knows the Bible very well. He knows the past, tries to alter the present and is also aware of his future. He also understands how much God loves Israel, the unconditional eternal covenants He ratified with the Jewish people (Genesis 12:1-3) and the promises He made to never destroy or forsake Israel (Jeremiah 31:35-37).

Moreover, Satan is aware that the Second Coming of Yeshua depends upon Israel’s repentance and cry for Him to return as He promised in Matthew 23:37-39. He will come back when Israel cries out Baruch Haba Bashem Adonai, “Blessed is He who comes in the name of the Lord.” As prophesied in Zechariah 12:10. At that moment begins the end of Satan’s career of deception and lies on earth. His final abode is the Lake of Fire and Brimstone for eternity, not as its boss like Hollywood would like you to believe but as one of the first ones thrown in for eternal torment with no hope of relief.

Satan has been instrumental in rewriting history and promoting irrational antisemitism for as long as Jewish people have existed. He also knows that he cannot rewrite the future. His destiny is set in stone, but he will do anything he can to postpone it. If he could prevent the Jewish people from recognizing Yeshua of Nazareth as their Messiah, which he thinks would buy him some time; and that is exactly why he invented antisemitism.  For centuries, antisemitism has been infiltrating the Christian Church on many levels.

Finally, when one sees the spiritual component of antisemitism, it should make it clear we need to pray for it to cease.   We might never be able to completely erase the irrational hatred of my Jewish people, but once we recognize its source, it is critical for us to pray against it – while educating people about it.  Scripture also tells me to love my enemies and pray for those who persecute me (Matthew 5:46), and I believe in the power of prayer.  Somehow, this has been the focus of my past 22 years.  I have a feeling that it will continue to be the focus for the next 22, if the Lord tarries.

Incidentally, on April 8, 2021, Israel commemorated Yom HaShoah (Holocaust Remembrance Day) with a country-wide coming to a stop at 10:00 AM for two minutes of silence. Because my grandfather didn’t die in vain, I remember and speak up. May his memory and that of the six-million be a blessing!