Home » Blog » There is a precedent for blind conformism, and you won’t like it!
Spread the love 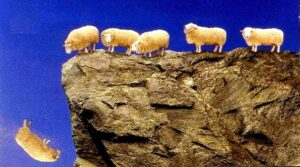 The dictionary defines a conformist as:“A person who uncritically or habitually conforms to the customs, rules, or styles of a group”, and conformism as:” the tendency to adopt the attitudes, behavior, dress, etc, of the group to which one belongs.” In and of itself, conformism is neutral, it is just an action by someone in an effort to fit within a certain community, movement or group. When conformism becomes very dangerous, is when people conform to ideals or rules that are anti-constitutional or totalitarian.

People will conform for many reasons. Some will conform to fit in and be accepted by their community and peers. That is when conformity meets compromise. Others will conform simply by personal choice because they desire to make a change in their lifestyle that they deem necessary.  There is yet another group of conformists; those who conform in fear for their lives as they are being forced by some sort of authority to do so. Fear is a powerful deterrent. When people conform out of fear, they usually do not realize that they are being conditioned for something bigger or for a later crisis. Are we being conditioned and if yes, for what? I understand that some people will think that I am over-reacting or seeing things that are not real. But please, bear with me!

There is a saying that goes like this:” Everybody called Noah a conspiracy theorist…until it started to rain!” Let me explain conditioning and conformism in a way that should clarify why I am very concerned about the current situation.

During the early stages of WW2, most of the world wouldn’t even believe that the Nazi war machine would be capable of such a carnage as the Holocaust. European Jews were slowly asked to comply with local authorities. “It is for your own safety!” They were told. So, as my paternal grandfather (who fought the great war of 1914-1918) did in Paris, Jews started to comply with the local authorities and slowly brought their radio sets to their police stations, not fully realizing that they were willingly disconnecting themselves from the world and the news.

Soon after that, my grandfather followed his people and brought his bicycle to the nearest police station, conforming to what was expected of him and the Jewish community “for their own safety”, again not fully realizing that their movement were being crippled as they all became forced pedestrians. The radios and bicycles were two of the many thin slices cut off the long salami of freedom. You cut enough thin slices one at a time and people don’t really notice until the salami is all gone. Pardon the analogy!

Then came the bolder moves. Jews had to have their ID cards stamped in red with the added name of “Sarah” for women and “Israel” for Men, as an easier way to identify them on the streets of Europe. But eventually, this was not enough.  The authorities needed a way to identify Jews at a glance, so the 12th century French yellow circle known as “la rouelle”, previously used to identify Jews during the Middle Ages, was re-introduced. This time the color was the same, but the shape shifted. Enter the yellow star with the word “JEW” on it. But not to worry, it was for their own safety! My mother remembered having to take the last car on the subway as she was forced to display the infamous yellow patch that she had sewn on all her garments. I remember her telling me that at the risk of getting caught and possibly killed, she always worked hard at covering it up with a scarf.

Yet again, keeping Jews in their homes crippled and uninformed wasn’t enough, so we started to see the organizing of large, forced Jewish communities, contained behind walls. The Ghetto was reborn (it originally was created in Venice, Italy in 1516.) Jews became segregated in large numbers in various Eastern European ghettos in cities like Lodz and Warsaw. But it was for their own safety! Yeah right! Ghetto life was unhealthy, dangerous and infested with diseases. Death was running rampant.

But the answer to “the Jewish question” wouldn’t come until the Wannsee Conference when Hitler and his people decided to implement the Camps. First internment, then forced labor and eventually, the gas chambers and crematoriums. Was it still for our own safety? “Just bring in your radio sets”, they said. How did we get to the gas chambers from there? Conformism, compliance and blind obedience! But what does it have to do with 2020?
Call me a conspiracy theorist, but I am convinced beyond the shadow of a doubt that as the world is confining and conforming, we are being conditioned and prepared for the coming of the Antichrist and the New World Order. I have believed that this was coming since my early days as a believer in the mid-80s, but I didn’t think that I would live through its birth pangs.

I feel that it is important at this point to re-iterate the fact that as a Bible believing follower of Yeshua, I also am convinced that the event known as the Rapture (1 Thess. 4:15-16; 1 Cor. 15:52), will take place before the event known as the seven-year Great Tribulation and the 1,000-year long Millennial Kingdom (also known as the Messianic Kingdom.) This being said, there is no indication in the Bible that things will not become increasingly difficult and even violent before the events of the Great Tribulation. Current world events seem to indicate that.

What I see happening around the world in general, and in America in particular, is a conditioning of the people through fear. Covid-19 showed up and we were all told to stay put for 14 days. Don’t quote me wrong, I do believe in the real danger posed by the virus, but how it has been handled is cause for great concern The first shelter-in-place order was in California on March 16, 2020. The 14 days of confinement and social distancing have turned into 123 days SO FAR, with no sight of return to normal in sight. Each state has its own regulations, but for the most part, people are being forced to conform “for their own safety and the safety of others.”

First they asked us to stay home for two weeks for our own safety. Then we were asked to social distance for our own safety. Then we were told to wear masks in public places “for our own safety” to the point where some stores will refuse service if you do not wear a mask, not to mention the stink eye you get from people for not wearing one. Over 90% of people are wearing masks that offer zero protection from any kind of virus, let alone Covid-19. It is akin to throwing sand at a chain-link fence, most of it will go through. I see the masks as pure conditioning of the people.

So, when a vaccine is finally available, will you take it? what if the vaccine becomes the way you receive service from businesses, stores and restaurants? Remember, “it is for your own safety!” They closed the country, shut down the schools, churches, public gathering, and all this while instilling the fear of death and the fear of law-breaking in all good citizens. There is no sign of this changing at the very least until November 4th, but that’s a topic for another post.

We need to use common sense and be prudent. Social distancing is a good idea and washing hands has been a good thing since germs were discovered a very long time ago. Nothing new here! I am not certain that we can truly express our opinions and our freedom of choice anymore, but we must not be swayed in to thinking that this whole thing is for our own safety. It is much bigger than that. Not to mention the witch hunt against our current administration.

The Rapture and the Tribulation are real events. They will introduce a new player on the scene who is also spoken of in the Bible, that is the Antichrist. He too is very real and extremely dangerous, especially to the Jews but also to anyone who hasn’t placed their trust in Yeshua as their Messiah (Isaiah 52:13-53:12, John 3:16.) For believers today, we need to be reminded of Romans 12:1-2 “Therefore I urge you, brethren, by the mercies of God, to present your bodies a living and holy sacrifice, acceptable to God, which is your spiritual service of worship. 2 And do not be conformed to this world, but be transformed by the renewing of your mind, so that you may prove what the will of God is, that which is good and acceptable and perfect.”

I only want to be conformed by the Holy Spirit to become more like Yeshua until I receive my eternal glorified body. In the meantime, my prayers for you and I is that we would use common sense and be bold about who we serve, who we bend the knee to and where we want to spend eternity.