You are here: Home / Antisemitism / The fire at Notre-Dame didn’t have to be a terrorist attack!
Spread the love 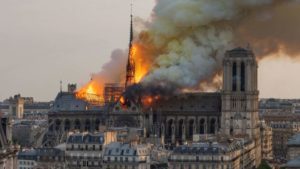 On Monday, April 15, 2019, the whole world stood still when 500 brave Paris firefighters fought a terrifying blaze that started around 7:00 PM local time. The 850-year old Notre-Dame Paris Cathedral was engulfed in flames. Notre-Dame de Paris was started in 1160 and took about one hundred years to be mostly completed. Over the centuries, it received several modifications, including the timber spire (19th Century addition) that collapsed in the recent fire. Notre-Dame de Paris was the tallest building of France until the erection of the Eiffel Tower in 1889. This architectural feat has been a symbol of Christendom and France for as long as one can remember.

French President Emmanuel Macron immediately vowed to do whatever it would take to rebuild the French monument. To date, almost one billion euros has been raised. Some Evangelical Christians have commented on the fact that this was just a building and that a relationship with God never required any building, but simply faith and a walk in humility. Granted! But I think they are still missing the point. Now is not the time to worship a building or its statues, icons and relics, now is the time to mourn the loss of art and architecture for what they are, multiple symbols of Western Civilization. That is indeed exactly what we should miss!

Notre-Dame is a symbol of Western civilization and one doesn’t have to look far to realize that Western Civilization is on a fast decline. In some areas of Europe, it is declining faster than in other areas. Without pointing the finger at local Muslims or other migrants, we can see that Europe is undergoing a major civilizational shift. There are several countries of Western Europe that currently have fewer grandchildren than grandparents. Any way you do the math, it spells the death of a country within one or two generations. Not to mention the lack of a labor force to fund the older generation’s retirement accounts. They might admit it or not, but several countries–Germany being at the forefront–invited large numbers of migrants to come within their borders, in the hope of replenishing their ailing and thinning workforce. That too is failing. Most people come to Europe with a different set of skills, if any, simply by virtue of coming from a completely different region of the world. How would you expect a person who lived and worked near the Sahara desert to function and contribute to society if they were relocating to Siberia? I know this is an extreme illustration, but you get the idea!

Additionally, most of those within the migrant population who come with a Muslim background, do not integrate into the society that welcomes them. They automatically create social, economic and religious enclaves, not only resisting integration but now slowly starting to force domination. This is not the case of all migrants and/or all Muslim, yet there are enough radicals to create a real danger to Western Civilization. Especially, if the real motives are hidden or not discussed by those in leadership who are made aware of the truth.

Many French Catholic churches have been desecrated and even set on fire in the last year. In some case, people even get in to defecate on the premises. Both Germany and France have reported that crimes against Christian churches have increased since Muslim migrants became part of the demographics. France alone saw over 1,300 attacks against Christian churches and facilities in 2018 (almost 900 of them being fires.) These attacks, outside of a few coming from deranged citizens of France, didn’t come from the French people, they didn’t come from the Jewish community (as anti-Jesus as a Jewish person might be), but they mostly came from people who ideologically hate Christianity, the indoctrinated radical Muslims. They are the first victims of the hate that has been injected in their DNA for decades.

We might never really know the source of the Notre-Dame fire, but the situation is such in France and much of Western Europe, that at least, it makes it possible for one to speculate and leave the door open for a terrorist attack. The soil is fertile to allow more hatred to grow and choke Christianity and Western Civilization. As a matter of fact, ISIS, who didn’t claim responsibility for the fire, threatened to start another one to finish the job. They were not involved, but they were quick to rejoice and post photos of the burning structure on social media with the caption: “It’s time to say goodbye to your oratory polytheism.”

Notre-Dame’s fire didn’t have to be a terrorist attack to draw the attention of those who promote Christianity and Western values. There is a track record of the destruction of Christianity in Europe that has existed for a while now. Lovers of freedom and democracy ought to be really concerned.

It is time to unite and rebuild Notre-Dame, but more importantly, it is time to expose hatred, prosecute its spewers and expel them out of the countries they refuse to integrate. Western civilization is at stake here!