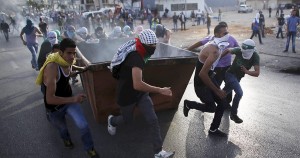 In the last month, Israel has reported almost 800 acts of terror. Much speculation arose in the media around the globe as to the possibility of a third Intifada slowly taking place. Yet, as of now, if we compare the current events to those of the First Intifada of 1987-1991 and of the Second Intifada of 2000-2005, we are not seeing an out-of-control uprising of a large number of Palestinians. It is simply too early to tell. There is little doubt that it could pick-up more momentum and become a third Intifada, but for right now it appears to be a random series of acts of terror by Palestinians acting as “lone wolves”.

Frankly, the recent attacks on Israeli citizens–as isolated and sporadic as they have been–are still posing a great danger to everyday life in the land. They represent individual jihad more than a third Intifada, but at the end of the day, the same people are targeted, the same people are victimized and the same agenda is promoted. Terror is terror is terror! Many unnecessary fatalities have been reported.

• Unpredictable Terror:
One of the grave dangers posed by this on-going terrorism in Israel is the fact that each act of terror is very unpredictable and very different form other murderous acts. Here are just a few:
• October 20: The stoning of a car forced an Israeli citizen to exit his vehicle and led him to be killed by a moving truck.
• October 18: A Palestinian grabbed the rifle off an IDF soldier, killed him and wounded eleven more people.
• October 16: A Palestinian disguised as a journalist stabs an IDF soldier
• October 13: A stabbing and shooting on a bus in Southern Jerusalem led to the killing of 4 people and wounding 15 more.
• October 1: Shooting to death of a young couple under the eyes of their wounded young children.

These acts are all different which makes them nearly impossible to predict or thwart. This unpredictability is possibly the greatest threat to Israel right now. Israel has become a world leader and expert on how to detect explosive devices ahead of their detonations. But how do you detect a knife made out of a school ruler? How do you predict the stoning of a car on the road? How do you avoid a car running into a group of people waiting at a bus stop? It is simple…You don’t!

• Cheap Terror:
Martyrdom has long been part of the Palestinian culture. Young Palestinians are indoctrinated at a very early age against Jewish people. They are told and taught about “killing Jews.” Death is part of the fabric of many Muslim countries in the Middle East, especially when it is connected to Israel. The promise of a “heavenly harem” of 72 virgins along with financial incentives to the families of homicide bombers have been common practice in Palestinian circles.

Not every Palestinian is keen on losing their life to “the cause”, but just about anyone would be willing to randomly hurt Israelis as they have done recently. This demands a very small investment of willing “Palestinian Martyrs” and thus is a cheap method of terror that becomes very attractive to many. We can expect a lot more of these acts in the upcoming weeks.

• Financed Terror:
It was good to hear that the US decided to cut its financial aid to Abbas by $80 million (why they still sent the remaining $290 million defies logic). Financial help to a terrorist group is basically terrorism. Why would we look at any other terror states such as Iran funding Hamas, Hezbollah or Al-Qaeda and see them as terror partners but ignore the United States involvement in terrorism?
Not one dollar of the $290 million that the United States sent Abbas in 2015 was ever justified, unless of course we bought Abbas’ lies about Palestinians being the victims of the Israeli occupation. The fact that the US retained $80 million in funding shows that something is wrong, but it is akin to trying to get somebody to stop smoking by pulling a few cigarettes out of their pack and letting them smoke the rest. It simply won’t work!

This current wave of spontaneous terror attacks on Israeli citizens and soldiers is not an intifada per se, at least not an “old school” intifada. Yet it might end-up being more damaging than the previous two intifadas. If creativity prevails, we will see more attacks in ways that nobody could predict. This has become a logistical nightmare for Israel. No wonder the mayor of Jerusalem recently announced to its Jewish residents that if they had a valid carry license, they should never leave home without a firearm.

The wolves attacking Israel might not come in packs and might be far from being well organized and structured, but they remain wolves with a ferocious appetite for Jewish lives. It is not about Jerusalem, it is not about the Temple Mount and it is not about the disputed territories. It is simply about the complete eradication of Israel and all Jews.

I still rest in the fact that God continues to be a Zionist and continues to protect Israel from complete destruction as we can read in Psalm 121:1-4
I will lift up my eyes to the mountains; From where shall my help come? My help comes from the Lord, Who made heaven and earth. He will not allow your foot to slip; He who keeps you will not slumber. Behold, He who keeps Israel Will neither slumber nor sleep.