Last week brought an interesting vote out of Switzerland. There was a referendum to ban further construction of mosque’s minarets (high towers). The margin in favor of the ban was very small –57.5 to 42.5–nevertheless, it passed.

The outcome is not likely to be of great architectural consequences in Switzerland or elsewhere in Europe. Daniel Pipes, a columnist on FrontPageMag.com, writes an interesting article about the event, in which he claims that the vote, as insignificant in its direct consequences to minaret building, means that Europe might be waking up to the threat of Islam taking over. 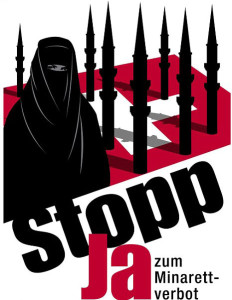 It will be interesting to see what Europe will do in light of Switzerland outcry.
Some European countries had their own polls and the results showed that they appeared to be in favor of the ban, as the article continues to state:

France: 49,000 readers at Le Figaro, by a 73-27 percent margin, would vote to ban new minarets in their country. 24,000 readers at L’Express agreed by an 86-12 percent margin, with 2 percent undecided. A leading columnist, Ivan Rioufol of Le Figaro, wrote an article titled “Homage to the Resistance of the Swiss People.” President Nicolas Sarkozy was quoted as saying that “the people, in Switzerland as in France, don’t want their country to change, that it be denatured. They want to keep their identity.”

Spain: 14,000 readers of 20 Minutos voted 93-6 percent in favor of the statement “Good, we must curb Islamization’s growing presence” and against “Bad, it is an obstacle to the integration of immigrants.” 35,000 readers of El Mondo replied 80-20 percent that they support a Swiss-like banning of minarets.

I believe that even though Europe might be waking up to the danger of an Islamic demographic take-over, it might be too late. For more on this read: America Alone by Mark Stein