Home » Blog » Sir Winston Churchill would say: “I told you so!”
Spread the love 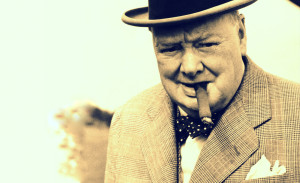 When you fail to be proactive you are left with two choices. You can completely ignore the crisis at hand and quickly become overtaken by it, or you can do your best to handle it as you become reactive. Today, the European Union finds itself somewhere in the middle of denial and reaction.

There is not one country in Europe that can ignore the reality of the current wave of emigration out of Syria, Afghanistan, Iran, Iraq and other countries. Some news outlets are even starting to describe it as an exodus, as we are seeing very large numbers of people fleeing various countries. Europe was touched by the photo of a Syrian baby’s body dead on the beach. The whole world reacted in horror and sadness. I join them in mourning the loss of that innocent little boy and the many others who tried to escape their respective countries. Germany reacted the strongest and took the lead in welcoming migrants. They might receive as many as 1.5 million people by year’s end.

German chancellor Angela Merkel continues to open Germany’s borders to tens of thousands of migrants. The Economist sees her as the catalyst of the migrants movement “the political courage of Angela Merkel, the German chancellor, who told her people to set aside their fear of immigrants and show compassion to the needy”.

I am not ready to call Merkel’s move “political courage.”I don’t doubt that she wants to help desperate people seeking asylum but I cannot ignore the fact that she is hoping to boost Germany’s economy by allowing migrants to be added to its workforce.  I would prefer to call it political courage mixed with economic greed. Yet, the professional skills and talent brought by the migrants remain to be determined. If they turn out to be unskilled laborers, Germany could find itself at the head of a bigger problem.

Sweden isn’t far behind and neither is France along with other countries like Serbia, Austria, the Netherlands and Hungary. Let’s face it, ethnic migrations are not a bad thing. America’s fabric is mostly the result of massive migrations over the years, and there is nothing wrong with that as long as there is a certain amount of control in the process of integrating migrants.

Control is exactly what Germany and most of the EU are lacking. Germany is seeing an increase of rape and forced prostitution between asylum seekers forced to temporarily live in tight co-ed quarters. But there are also many reports of rape of German women by migrants, as there are apparently more males than females migrating to Europe and the demand for female sex partners is high. Even if many of the new immigrants are not rapists or thugs, reports abound of Muslims refusing treatment by women in hospitals and relief centers.

Another ignored danger coming to Europe is anti-Semitism. Almost all the asylum seekers, being war refugees or economic migrants come from Muslim countries. They were raised where anti-Semitism is a congenital indoctrination. Hating Jews and desiring the destruction of Israel is in their cultural DNA. No, this doesn’t make every single Muslim an anti-Semite, but it still increases the danger of Jew hatred on a continent that certainly could use a break in that area. With about a million refugees coming to Germany by the end of 2015, the scale is quickly being tipped. Apparently, some Palestinians and some members of ISIS are mixed in the current flux of migrants. They didn’t flee Islam, they fled a geographical area to bring Islam to another, and that is a critical difference that we shouldn’t ignore. The jewish communities of Germany, France and the Netherlands to name just a few, are worried about surges of radical Islamic anti-Semitism.

Some will be quick to react and claim that this is Islam’s ultimate goal of a global Caliphate as they attempt to retake areas that were previously under the Muslim banner. It is possible, but even if the current “exodus” is not a direct invasion–and it probably isn’t–it creates a lot of tension as Islam still continues to grow in Europe.

When I was conducting my research for my first book “They Have Conspired“, I came to the conclusion that at the current rate (2000-2005) of Muslim immigration and birthrate, Europe would probably become a continent with a majority of Muslims by 2050. I was not counting on the current mass exodus that has been taking place for the last few months. I do not think that it will take another 35 years for the scale to be tipped. Of course, we have to also take in consideration that many European countries are seeing their natives immigrate to other countries. What I am saying here is no different that what I said 10 years ago except for the fact that things are speeding up in front of our eyes.

Several European countries are on the verge of economic collapse. Greece is already there. The migrant crisis is not just a humanitarian crisis. It is also a cultural crisis, a financial crisis and a political crisis. It looks like Europe is letting the fox inside the chicken coop. In the meantime, there are plenty of countries that could welcome some of the refugees but won’t. Many of them in the Middle East and the Gulf States, a place where culture, ideology, language and religion are already familiar to many of the refugees.

The very fabric of Europe and even of Western Civilization is about to change forever very quickly, and I am not sure that it is for the better! It might surprise you but look at what Sir Winston Churchill said it in 1899:“Individual Muslims may show splendid qualities, but the influence of the religion paralyses the social development of those who follow it. No stronger retrograde force exists in the world. Far from being moribund, Mohammedanism is a militant and proselytizing faith. It has already spread throughout Central Africa, raising fearless warriors at every step; and were it not that Christianity is sheltered in the strong arms of science, the science against which it had vainly struggled, the civilization of modern Europe might fall, as fell the civilization of ancient Rome.”

If he was around today, he would look at the European leaders take a puff off his cigar and say: “I told you so!”