You are here: Home / Antisemitism / Play Soccer and Kill the Jews!!!
Spread the love

One might ask what do soccer and Jew hatred have to do with each other? Nothing at first glance! Yet if you attend a soccer game in Europe, particularly in the Netherlands, you might hear fans shouting things like “Hamas, Hamas, Jews to the gas!” or even “horrible cancer Jews!”
Why in the world would such anti-Semitic slogans be delivered from the bleachers, during a soccer game? Is one team playing against the Israeli team? No! (not that it would justify the hatred anyway). Are some of the players Jewish? Not necessarily!
It appears that the team from Amsterdam known as Ajax had its fans refer to themselves as Jews years ago. Some claim that it has Jewish roots. Israeli flags are displayed at games, fans call themselves “Super Jews” and there was even a time when the song o f victory was “Hava Nagila”. The Jewish connection, if it ever existed, is far into the past anyway. The fans have recently been encouraged to drop the Jewish themes, to no avail, as the picture below seems to indicate. 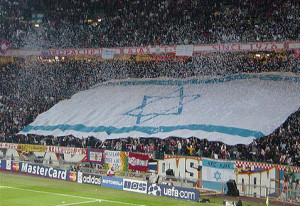 Personally, I think that this is a bit strange and out of place at a sport’s event, but I cannot really complain when anybody chooses to identify themselves with my people in any positive way. It just happens so seldom!
My concern lies with the rival teams using anti-Semitic diatribes against Ajax and its fan base. To be sure, they are anti-Semitic in content NOT in context! But does that really matter? When is it EVER appropriate to shout back that Jews should be gassed or to make a hissing sound reminiscent of the sound of the gas flowing in Auschwitz corridors of death, during the game?
There is something inherently wrong going on here. While I can understand the mockery that goes on between two sides at a game, belittling the Holocaust will never be an appropriate approach in that context (or any context for that matter).
Would it be OK to shout “Go back to picking cotton” at an African American team or fan base? NO!
Would it be OK to shout ” We bomb you again” at a Japanese team or fan base? NO! But not to worry, this would never happen anyway in our politically correct/ ethically crippled world! Do I detect a bit of a double standard here?
So, by the same principle, while it is unfortunate that the Ajax fans call themselves “Super Jews” the politically loaded statement of “Hamas, Hamas, Jews to the Gas” sends a message that goes much deeper into the Jewish psyche than a simple soccer game insult, and that is simply loathsome and wrong.
It is rooted in anti-Semitism and fueled by the modern acceptance that Jews around the world are a nuisance, thus it OK to denigrate and demonize them. Nobody seems to care anyway!
All over the world, my people tread on very thin ice already. Europe is increasingly becoming a continent where Jews are again NOT WELCOME. I think this goes to prove that the chameleon of hatred that is anti-Semitism can take many different colors but at the end of the day, it is the same beast!
I am reminded from God’s word that all men are made in His image thus that all men are equal.
“And God created man in His own image, in the image of God He created him; male and female he created them (Genesis 1:27)
Yeshua (Jesus) also taught in Luke 10:27