Home » Blog » Palestine Before the Palestinians!
Spread the love 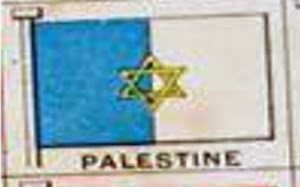 Way before Yasser Arafat, the PLO, Hamas, Fatah, Mahmoud Abbas and the likes, there was a Palestine. There was a Palestine that was recognized by the entire world and that was just fine. I am actually in favor of what Palestine used to be prior to the 1960s. Unfortunately, the word “Palestine” has since suffered from some kind of etymological virus for which there seems to be no cure. But why would the world look for a cure when nobody feels that there is even an virus? Yet it is pandemic!

• The original meaning of the word “Palestine”: While the exact origin of the word “Palestine” is still debated, there are aspects of the word’s meaning that we can know for sure. It is indeed very possible that it is a word that once described a people group known as the Philistines. But that people group was in no way connected to the modern Palestinians. Not ethnically, not linguistically and not culturally. In 132 CE, a Jewish revolt took place against the Romans. It was known as the Bar Kochba revolt (Bar Kochba was a false messiah in Israel at the time). In a nutshell, things didn’t end well for the Jewish people and in addition to a blood bath of gigantic proportions, Israel was renamed Palaestina by the Romans in an effort to undermine Jewish history and humiliate the Jewish people further. Additionally at the time, Jerusalem was also renamed Aelia Capitolina by emperor Hadrian. The name stuck and continued to be used after that time.
As a matter of fact, when the British were in control from 1922 to 1948, the area was governed under what was known as the “British Palestine Mandate”. In the original text of the Mandate itself dated from 1922, we can read: “Whereas recognition has thereby been given to the historical connection of the Jewish people with Palestineand to the grounds for reconstituting their national home in that country”. Sounds very Jewish to me!
If we take a look at article 4 of the Mandate, we also find two words in the same passage that any modern day Palestinian would be hard pressed to associate in a positive light: Palestine and Zionist. Yet, in the context of the original Mandate, it was to the current leaders of the Zionist movement that the administration and government of Palestine were entrusted to, as we can read: An appropriate Jewish agency shall be recognized as a public body for the purpose of advising and co­operating with the Administration of Palestine in such economic, social and other matters as may affect the establishment of the Jewish national home and the interests of the Jewish population in Palestine, and, subject always to the control of the Administration to assist and take part in the development of the country. The Zionist organization, so long as its organization and constitution are in the opinion of the Mandatory appropriate, shall be recognized as such agency. It shall take steps in consultation with His Britannic Majesty’s Government to secure the co­operation of all Jews who are willing to assist in the establishment of the Jewish national home.
As a matter of fact, until the early 60s, Palestine was always synonymous with Israel and/or Holy Land. Arabs in neighboring countries never called themselves Palestinians but rather Syrians, Lebanese, Jordanian, Egyptians, etc. Most Arabs in the early 1900s would have argued that Palestinian Arabs were simply Syrians.
Recently, an interesting new piece of evidence in favor of Jewish Palestine was found in the most unlikely of places. Some will argue that it is just anecdotal and that it certainly doesn’t prove anything, but I would beg to differ.
The evidence comes from the pages of a French dictionary known as the “Larousse Dictionary”. Larousse Publishing House was started in France in 1852. They published their first dictionary in 1856. In France, Larousse has become synonymous with “dictionary”.
It is within a 1939 edition of the Larousse Dictionary that the flag of Palestine was found amidst the flags of the world. On the right page, third from the top and third from the left, we can see a flag made of two equal squares, a light blue on the left and a white on the right. Superimposed in the center of the 2 squares is a yellow magen David (Star of David), which as we all know is the Jewish symbol par excellence. Dated from 1939, which was the start of World War Two, the dictionary wouldn’t include Israel (not re-born as a modern nation until 1948). Note also that on the first line of flags on the left page, you can see the German flag harboring the now infamous swastika of the Nazi regime. There is thus no question as to the time frame of the publishing of this volume. So what happened that changed it all? 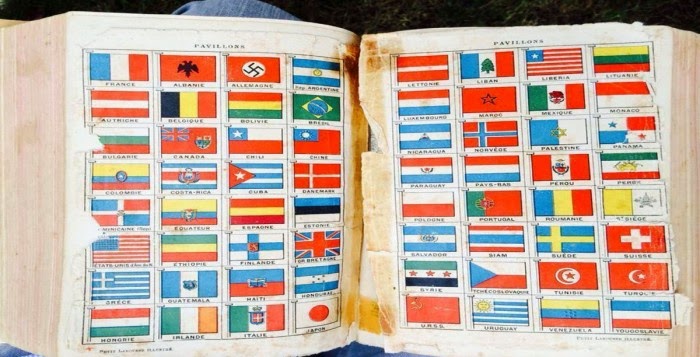 • Alternate meaning of the word “Palestine”: It is not uncommon for the etymology of certain words to evolve with the times, culture and history. It is neither good nor bad but simply a result a change in the meaning of a word over time. So why is it that in the case of the word “Palestine” we should look at its new meaning carefully and I would go as far as saying that we should even reject it?
For those of us who are concerned with historical accuracy, the meaning of “Palestine” is pretty straight forward, it simply describes the ancient name given to Eretz Yisrael and thus to a piece of land biblically known as the “Land of Canaan” (Genesis 17:7-8) given to the children of Israel by the God of Israel, period!
But today, Palestine doesn’t have any more Jewish connotation whatsoever. Palestine is allegedly the historical homeland of the Palestinian people, who because of their unalienable right to self-determination have the god-given right to fight for their return. But do they? I strongly disagree with that assumption! unfortunately, this re-definition is the result of a geo-political move by Yasser Arafat after the Six-Day war of 1967. The Palestinian people were created and forced to remain in refugee camps created at the time as well. After almost half a century of propaganda and indoctrination, history has been reversed and rewritten and the Palestinian flag certainly doesn’t bear the Star of David any more. On their site on Palestinian Facts, the explanation of the new flag includes a statement about it adoption by the “Palestinian people” (who didn’t exist then or now) as early as 1917, yet in 1939 it was the flag with the Jewish Star.
I agree that it takes more than a flag to validate a people’s right to exist and right to the land, but historians and Bible scholars alike have documented Jewish existence in the current land of Israel for over 3,500 years, uninterrupted since the days of Joshua.
So next time you hear about Israel the “occupier” of Palestine from Muslim leaders, Pro-Palestinian liberals, Christian anti-Semites and even self-defeating Jews such as those from the organization known as JStreet, consider the facts. You might not be able to change the minds of brainwashed anti-Jewish people, but you certainly deserve the truth about Israel and the Jewish people.
Palestine existed long before the “Palestinians” were implanted there. It was, is and always will remain the Jewish homeland; historically, geographically and last but not least, biblically. Don’t let the name fool you!