Home » Blog » Omar, Tlaib and Israel: A lose/Lose Situation No Matter What!
Spread the love 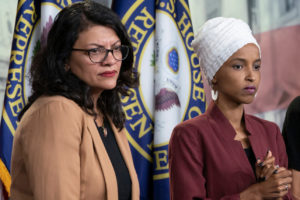 Congresswomen Rashida Tlaib and Ilhan Omar recently prepared for a trip to Israel. Technically, no member of the US Congress should be banned from visiting Israel. As a matter of fact, the best way to get a balanced understanding of the Middle East crisis is to visit Israel and look at both sides of the conflict. If such a visit could be accomplished without any preconceived notions of who is at fault, much progress could be made towards peace.

When Rashida Tlaib and Ilhan Omar announced their decision to visit Israel, it was first agreed that they could go, but there is a law in Israel that prevents people from entering the country if they support the boycott of Israel. It is known as “Amendment No. 28 to the Entry Into Israel Law (No. 5712-1952).” It is an amendment to a 1952 Law giving Israel’s government the right to refuse entry to any foreigner with or without a visa. The 2017 amendment was passed (46-28) specifically to bar BDS (Boycott, Divestment and Sanctions) supporters and promoters from entering Israel.
I am having a hard time understanding why Ms. Tlaib and Ms. Omar were surprised when they were stopped from entering Israel. Consider their positions on Israel’s right to exist and their promoting of the BDS movement.

Rashida Tlaib is not shy about her support of BDS. In 2018, she said, “I personally support the BDS movement. Economic boycotts are a way to bring attention to issues like racism and the international human right violations by Israel right now.”  Ilhan Omar follows suit when she states, ” “Israel has hypnotized the world, may allah awaken the people and help them see the evil doings of Israel.” or “I believe and support the BDS movement and have fought to make sure people’s right to support it isn’t criminalized.” Both Congresswomen are what we could call “eliminationists.” They promote the boycott of Israel not for justice but for the eventual elimination of Israel. So, let me get this right, “Israel has no right to exist” but they still want to visit?

Some would say that we should let them in and see for themselves. Assuming that they were interested in truth, I would agree, but as it appears, they are not. For starters, their trip’s itinerary was titled “Delegation to Palestine“, hardly an unbiased title for a trip to Israel! Additionally, Their trip was planned by an organization known as Miftah, led by Palestinian lawmaker and negotiator Hanan Ashrawi.

This is an organization that is far from being fair and has a reputation for being anti-Israel if not anti-Semitic. Using Miftah to organize a visit to Israel is far from being a neutral decision. Then, when Israel decided to allow Ms. Tlaib entry to the Palestinian Territories on a humanitarian basis to be able to visit her aging grandmother, she quickly turned it down and politicized the whole move. Does she hate Israel more than she loves her grandmother?

This attempt to visit Israel seems to be a farce. Tlaib and Omar have already made up their minds about the region and have dispensed plenty of antisemitic venom in and out of the US Congress to show their true colors. This will become a huge opportunity for the two congresswomen to do more bashing of the Trump administration and of Israel. It doesn’t matter if they went or not because in both cases they would have found grounds for pointing the finger in the same direction.

If they had gone, they would have visited only Palestinian sites and met with pro-Palestinian people, and then return to make a case for how bad things are in the region. By not going, they can spin the story into a racist, colonialist, apartheid decision “proving their point about Israel.”

They were quick to state (and some news outlet as well) that they were banned from entry because they are Muslim. The reason had nothing to do with their religion but with their anti-Israel position. Yes, they happen to be two Muslim women, and yes, there might be a connection with that and their hatred of Israel and the Jewish people, but this is not part of the reason why they were turned down, especially if you understand Israel’s acceptance of Muslims even to the point of having Muslim members of the Knesset.

This failed attempt at coming to Israel will, unfortunately, serve their purpose as much as a visit would have. They are set in their ways and the only way to make sure that things don’t get worse is to vote them out next time we have a chance. They were elected legally and are part of our government, like it or not. It is pretty much a guarantee that they will continue their war on Israel and the Jewish people, and they will pick up momentum and more supporters in the process. Again, to put a stop to it, we simply have the power to not re-elect them. For the time being, we expose their lies.  We also pray that they would have a change of heart. This too is possible because of the God we serve!