Home » Blog » Now you can be a “Dirty Jew” even if you are not Jewish!
Spread the love 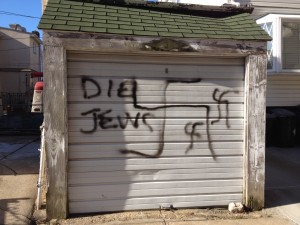 It was about a year ago that a café in Belgium posted a sign on its window stating that dogs were allowed inside but Jews weren’t. The sign didn’t stay on the window for very long as the outrage of several Jewish organizations was quickly demonstrated and the police was dispatched on the scene to take the sign down. They might have pulled the message away from the public, but they certainly didn’t change the mindset of the café owner.

It was only a few days before that incident that another store in Belgium decided for a short time that they wouldn’t sell merchandise to Jews. Similarly, the police came to that store to question the owner about their strange decision. The owner swore that this wasn’t true and that in fact they had many Jewish customers. While it is again very hard to prove that they indeed chose not to sell to a Jewish woman, the behavior was symptomatic of serious problem.

A recent incident in Belgium further proves the point that anti-Semitism is viral, lethal and irrational. Yet at another café in Brussels, a European Union official insulted a woman, calling her a “dirty Jew”. The woman engaged the EU official in conversation, complaining about an item he had in his hand that was displaying former Italian fascist dictator Benito Mussolini. In sharp disagreement with the woman, the man said: “Dirty Jewess … Hitler should have exterminated all Jews, just like Jews today are exterminating Palestinians.” Here again we see a display of anti-Semitism based on the false premise that Jews are killing Palestinians just like Nazis killed Jews. The altercation turned violent when the man by then identified as EU Maltese official Stefan Gersh started to hit the woman and add: “All you Jews should have been killed.”

An investigation is taking place and the man will most likely be disciplined and possibly even lose his position within the European Union. After all, many of us remember how former Dior designer John Galliano lost his job after a similar incident in a Paris café where he praised Hitler and insulted two women in very similar terms as what just took place in Belgium. Galliano was caught on video speaking to the two women and saying: “I love Hitler, and people like you would be dead today. Your mothers, your forefathers, would be … gassed and … dead.”

What is probably the most puzzling and disturbing aspect of Galliano’s and Gersh’s diatribes is that they were both directed at people who were not Jewish. This has to be the epitome of irrational hatred when you become verbally and/or physically abusive to someone you believe to be Jewish who in fact isn’t.

This also should make decent people realize that we could now all become targets of anti-Semitism simply because of someone’s preconceived idea that could potentially lead them to abuse and violence. This could be a game changer! Maybe this unfortunate twist in the way anti-Semitism is expressed and/or carried out is what is needed for people to speak-up. After all, there’s no better way to fight a monster than when it is in your own backyard threatening to devour your entire family.

I used to say that “Anti-Semitism is hatred of the Jewish people characterized by destructive thoughts, words and/or actions against them.” I still believe that! Additionally, anti-Semitism goes further as it is the only kind of hatred that includes contempt for the people, the land and the law. All aspects of Jewish life, customs and culture, along with the Jewish homeland are not exempt from the vitriol of anti-Semitism. But today, it is no longer any act or behavior connected to Jewishness or Judaism that puts you at risk. You are at risk if you support Israel and the Jewish people or if you speak-up against pro-Palestinians or BDS proponents. Basically, you are also at risk if the person dispensing the vitriol of anti-Semitism decides that you are “Jewish enough” to deserve such a treatment. This makes absolutely no sense at all!

During the Middle Ages, the image of the Jew had been brought down to the lowest possible level as Jewish people were described as blood drinking devils with a stench. No wonder the masses saw it their obligation to rid medieval Europe of such a malevolent group of people. That trend has resurfaced globally and for the most part people are either drinking the proverbial Kool Aid or at the very least serving it to their community.

In today’s world, you don’t even have to be Jewish to be a “dirty Jew”. And all this time I thought that we–the Jews– were special!