You are here: Home / Antisemitism / Not the Way We Want to Remember Kristallnacht!
Spread the love

It was seventy-one years ago yesterday when Nazi Germany orchestrated one of the most destructive campaign on Jewish people and property. In November of 1938,triggered by the assassination of German diplomat Ernst Vom Rath by Herschel Grynszpan, a German-born Polish Jew, Kristallnacht was unleashed . 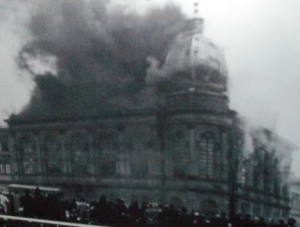 As a result, almost 100 Jewish people were murdered and close to 30,000 were arrested and placed in camps. 267 synagogues were destroyed and thousands of homes and businesses were ransacked.

Kristallnacht or “The Night of Broken Glass” was also the pretext for Nazi Germany to propel their morbid “final solution to the Jewish question” to the forefront. The death machine was put in motion, and for the next seven years, as history tells us, very little could stop it. 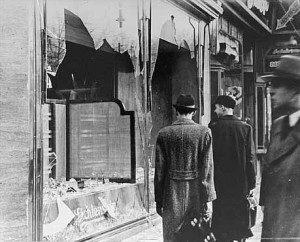 The events that took place over seven decades ago are burned on the Jewish psyche like the branding iron of anti-Semitism. It is a painful reminder to my people, each year in November to recall how they were lowered to a sub-human level by the Nazi death factories. We do remember, but we wish to quickly move on to resume our daily activities.

Unfortunately, we still have to be reminded about the horrors of the Holocaust and Kristallnacht by ways that are so despicable that they are difficult for me to even report.

But the hatred of anti-Semitism is still raging as we just found out with the events that took place in the Sacramento area last tuesday. A synagogue was vandalized with Nazi symbols painted on walls and windows as well as some bushes burned. (Full story here).

The depravity of the human race is such that we still see events like this take place not only in California but all over the United -States and the rest of the world. But there is a way to avoid these dreadful events. There is away for mankind to be redeemed and to love its neighbors.

His name is Yeshua (Jesus) and He came 2000 years ago to die for mankind’s sins. For yours, for mine, for those of the people who hate Jewish people…..for ALL.

We must simply put our trust in His death and resurrection for our sins to be forgiven and have eternal life. Once we do such a thing, the Spirit of God will live in us, we will be changed and only then will we get along as brothers and sisters in Messiah Yeshua.

“For God so loved the world, that He gave His only begotten Son, that whoever believes in Him should not perish, but have eternal life.”