Home » Blog » Macron and Antisemitism: It is easier to agree with history rather than to make history!
Spread the love 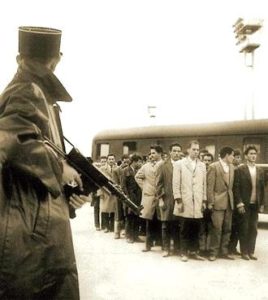 Much of the world communities are still applauding French President Emmanuel Macron for the bold statement he made during the 75th Anniversary of the Vel d’Hiv round-up in Paris on July 16, 2017. In the summer of 1942,  (July 16 and 17,) over 13,000 French Jews were gathered by force inside the Paris winter stadium (Velodrome d’Hiver.) The move was ordered by the Nazi regime out of Germany and the orders executed by the French Vichy government militia under the leadership of Marshall Philippe Pétain. It led to the deportation of these 13,000 french Jews as part of the killing of a grand total of 78,000 French Jews during the Holocaust.

It has remained a dark stain in the annals of France’s history since World War Two. As a matter of fact, many French presidents until Jacques Chirac (President from 1995-2007,) preferred to avoid the subject of the Vel d’Hiv round-up. Diametrically opposed to Mr.Macron, we find the leader of French Front National, Marine Le Pen who declared that France was not responsible for the horrors perpetrated by the Vichy government.

The 2017 Ceremony was the first time both a French President AND an Israeli Prime Minister attended the Vel d’Hiv Commemoration. Mr. Macron spoke boldly and declared that not one German was involved directly, thus exonerating German guilt and shifting the blame where blame was due.  But these words, as powerful, bold and healing as they might be for some of the parties involved–namely the Germans and the families of the Jewish victims– raise a few questions.

I cannot help but wonder if Mr. Macron spoke boldly against antisemitism, exonerating German guilt in the Vel d’Hiv round-up, so that he would solidify France’s relations with Germany? Mr. Macron is a self-declared centrist who has ties to the French socialist government. He is also a globalist, interested in the Eurozone while his opponent, Le Pen wanted to exit the European Union. Mr. Macron needs strong ties with Germany to fulfill his agenda of “euro-globalism,” and his desire to strengthen Europe. He has vowed to lift the state of emergency in place since early 2015 as well as adjusting and strengthening the laws against terrorism and radical Islam. This is–to say the least– a delicate balance between personal freedom and national security that, in my opinion, will be greatly hindered by a globalist approach. Time will tell, and hopefully without the loss of additional innocents lives.

And yet, with his bold presence at the Vel d’Hiv Commemoration, I cannot help but think that as honorable as it was, it is always easier to to agree with history in hindsight, rather than to make history. In our day and age, who would argue with the evil acts of Nazi Germany and even the Vichy government? On one hand, no one with integrity would attempt to vindicate or even exonerate the Nazis for barbarism against 6,000,000 Jews and other victims. On the other hand, it is a bit more complicated to point a politically incorrect finger at the perpetrators of a new breed of contemporary antisemitism taking place on Mr. Macron’s watch. It is always easier to point at those who did rather than those who do!

Additionally, Mr. Macron met with Mahmoud Abbas at the Elysée Palace, days before he met with Mr. Netanyahu. He reiterated his desire to achieve peace in the Middle East and condemned what he called “Israeli occupation,” clearly showing his position in the conflict as well as a certain lack of understanding of the facts.

How can he possibly commemorate an event that helps us preserve the memory of the Holocaust and say ““We will never surrender to the messages of hate; we will not surrender to anti-Zionism because it is a reinvention of anti-Semitism,”AND meet with a man whose very dissertation was on the theme of Holocaust denial. There is a serious disconnect here! But in our world of politics and diplomacy, leaders take each and every small victory they can take in the global arena, so Mr. Netanyahu praised Mr. Macron for his verbal stance against antisemitism, regardless of which part of history it was referring to.

Dear Mr. Macron, I don’t think that you can have your proverbial “Middle East cake” and eat it too . Genuinely fighting antisemitism, lifting the state of emergency, dialoguing with the terrorist head of the Palestinian Authority and keeping French citizens safe, while allowing France to be a relevant part of the European Union seems to be a very tall order, and one that is filled with contradictions. Something has got to give!