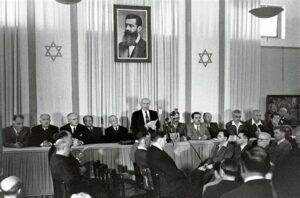 In Part 1 of this two-part series, we defined Zionism and looked at its early development all the way up to the First World War. Key events occurred in the first two decades of the twentieth century that would further define and help establish Zionism as we know it today. They are worth mentioning. For this, we need to go back to the summer of 1914.

June 28, 1914 saw the assassination of Archduke Franz Ferdinand in Sarajevo. As a result, WWI was declared, and the face of Europe changed forever. At the beginning of WWI, eighty percent of the ten million Jews of Europe lived in the Russian and Austro-Hungarian Empires. The Jewish communities of Europe had grown accustomed to hardship and had endured many forms of antisemitism. Unfortunately, the advent of WWI worsened their condition as their lives became once again punctuated by lootings, pogroms, and expulsions.

As the war progressed, allied nations ratified various treaties and worked on agreements to share the spoils. It was soon agreed that the Ottoman Empire would have to be divided. One treaty superseded the previous; and by the end of the war, the British had conquered the area known as “Palestine” since the first century. In the midst of all negotiations, Britain officially endorsed the Zionist program; and almost overnight, Zionism started to take root in the Holy Land. This was a major step in the right direction for the Jewish people, yet the surprise of a British endorsement would eventually be overtaken by the shock of a British about-face.

The British government being favorable to a Jewish homeland started to meet with Zionist leaders towards the end of the WWI. One important figure of that time who would also become Israel’s first President, was Chaim Weizmann (1874-1952). Diplomacy continued to play a part in the furtherance of the Zionist agenda, and Weizmann was good at it.

In 1906, Weizmann had just helped the British by sharing his formula to better produce acetone (related to the production of TNT), an invention that helped greatly with the war effort. Consequently, he became pretty close to Lord David Lloyd George, who would later become prime minister of England. But it was not until Weizmann had a meeting with Lord Arthur James Balfour that things began to crystallize. Balfour, who had tried to convince Weizmann that the Uganda proposal as the new Jewish homeland was a good deal, somehow ended up convinced by Weizmann that only the land of “Palestine” would be acceptable. From that point on, Balfour became a Zionist. Weizmann met Balfour again when Lloyd George was prime minister, and Balfour told him: “You know, I was thinking of that conversation of ours in 1906 and I believe that when the guns stop firing, you may get your Jerusalem.”

In 1917, after having become a British citizen, Weizmann became the first President of the British Federation and worked feverishly with Lord Balfour to develop what would be known as the “Balfour Declaration.” This milestone for Zionism vindicated the works of Theodor Herzl, Chaim Weizmann, Nahum Sokolow, and other key Zionist leaders. Things appeared to be looking up for the Jewish people and the establishment of a Jewish homeland in “Palestine.” The Declaration stated: His Majesty’s government view[s] with favour the establishment in Palestine of a national home for the Jewish people, and will use their best endeavours to facilitate the achievement of this object, it being clearly understood that nothing shall be done which may prejudice the civil and religious rights of existing non-Jewish communities in Palestine, or the rights and political status enjoyed by Jews in any other country.

In 1919, Balfour reiterated Britain’s favor of the establishment of a Jewish homeland in “Palestine”, and included a commitment from France, Italy, and the United State: “The Four Great Powers [Britain, France, Italy and the United States] are committed to Zionism. And Zionism, be it right or wrong, good or bad, is rooted in age-long traditions, in present needs, and future hopes, of far profounder import than the desires and prejudices of the 700,000 Arabs who now inhabit that ancient land. In my opinion that is right.”

Just as historian Abba Eban said: “The Balfour Declaration is the decisive victory of the Jewish people in modern history.” In 1922, following the historic concept found in the Balfour Declaration, the League of Nations (an organization charged with using diplomacy to maintain peace, and a precursor of the United Nations) had a say. It approved the British Mandate for “Palestine”, giving Britain jurisdiction over the Holy Land and thereby authority to help with the securing of a Jewish Homeland.

A disagreement arose as a direct result of two conflicting promises being extended during World War I (WWI) by the British government regarding the Holy Land. One promise was made to the Arabs as a reward for help against the Ottoman Empire, and a conflicting one to the Jewish people through the Balfour Declaration. These two conflicting promises would create a serious hindrance to the advancement of Zionism. By the delay in enacting a Jewish homeland, the annihilation of millions of Jewish people during the Holocaust of WWII was facilitated.
While Zionist pioneers continued to settle in “Palestine”, the world was again about to enter into conflict. Once again, the Jewish people would become the scapegoats of humanity, this time in proportions that had never been reached before.

Additionally, the large influx of Jewish people fleeing a pre-WWII Europe for “Palestine” led to the Arab revolt of 1936-39. This nationalistic uprising for independence from the British wasn’t successful for the Arabs, but it led the British forces to pay attention to some of the Jewish groups present in the area such as the pioneer group known as the Haganah which later became the Israeli Defense Force (IDF).
After witnessing the failed revolt and very concerned, Britain responded by appointing a Royal Commission, known as the Peel Commission, which recommended that “Palestine” be partitioned into Arab and Jewish lands. The Peel Commission led to the publishing of the “1939 White Paper” by Britain that would change the promises made by Lord Balfour and seriously limit Jewish immigration into “Palestine” at a time when Jewish people were being led in droves to the gas chambers. Closing the door to a safe place for Jews to settle was poor timing, to say the least!

“The war against the Jews” as author Lucy Dawidowicz called WWII, eventually ended in 1945 with the capitulation of Germany. Three years later in 1948, another milestone of prophetic proportions was about to take place. Israel was about to be reborn as a modern nation. Was it the result of the Holocaust or the persistent toiling of the early Zionist fathers? Or both? It is impossible to determine clearly, but it had to happen for future unfulfilled Bible prophecies to eventually take place. The fact remains that much of the groundwork laid out by visionaries such as Herzl, Weizmann, Ha’am, and Ben Yehuda was about to pay off, yet not without a further sacrifice that is still being felt today in the twenty-first century.

Many followers of Yeshua look at the Bible and clearly see that God is NOT done with Israel. They see a glorious future for the people and the Land. They understand that the promises of Genesis 12:3 still stand, and they want to be in the center of God’s will by blessing the people that He calls “the apple of [His] eye” (Zechariah 2:8). Believers in Yeshua who recognize Israel’s biblical and historical right to the Land and the Jewish people’s right to return to the Land are often called Christian Zionists. God Himself declared this plan in His Word; thus, Christian Zionism is a noble cause and is part of what every Bible-believing Christian should promote.

It is a fact that there is a lot of Scriptural evidence validating the claims of Zionism, not to mention the fact that God Himself said that only HE owned the Land in Leviticus 25:23: “The land, moreover, shall not be sold permanently, for the land is Mine; for you are but aliens and sojourners with Me.”

Zionism continues to weave like an uninterrupted thread through the tapestry of Jewish history. If Zionism has existed for a long time, we also cannot deny that God has used people like Herzl, Ha’am, Ben Yehuda, Weizmann, Ben-Gurion, Golda Meir, and many others to further promote the right of the Jewish people to their ancestral Land of Israel. What God established, no man can destroy (Jeremiah 31:35-37). In the words of Abba Eban, Israeli Ambassador to the United States, a diplomat and politician: “Zionism is nothing more – but also nothing less – than the Jewish people’s sense of origin and destination in the land linked eternally with its name.”

By the way, let me finish with this thought, as Israel is often accused of Ethnic Cleansing. Ethnic cleansing or genocide is intentional organized mass murder to eradicate a people group. The Armenian Genocide and the Holocaust qualify as ethnic cleansings. In 1947 there were about 1.2 MM Arabs in British Mandate Palestine. Today, there are about 6 MM Arabs in the whole land, including 1.8 MM in Israel alone. There are more Arabs in Israel today than before 1947. This is the opposite of ethnic cleansing. On the other hand, there are still less Jewish people in 2019 than there were prior to the Holocaust. It does pay to check facts!

The foundation for Zionism was established by the very first Zionist – God Himself – in the book of Genesis. Incidentally, being a Zionist doesn’t require one to be anti-Palestinian, but sadly, and for some irrational reason, being pro-Palestinian seems to require being anti-Zionist and thus antisemitic!