Home » Blog » It’s Never Too Late to Speak the Truth!!!
Spread the love 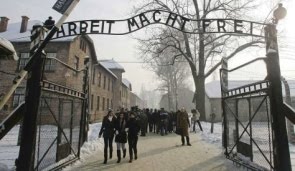 Today, January 27, 2011 is Holocaust Memorial Day (HMD) around the world. The United Nations declared this an International event in November 2005. The date was selected because it was on this date in 1945 that the death camp Auschwitz-Birkenau was liberated.

As I remember my own grandfather Maurice Weinzveig who perished there and as I reflect on my recent trip to Krakow, Poland, I am reminded that mankind has an obligation to perpetuate the memory of the Shoah (Holocaust). Be it for six million or just for one, all the innocent victims must be remembered as the world vows to “NEVER AGAIN” let a catastrophe of that kind happen again.

Unfortunately, Holocaust denial, revisionism and antisemitism militate vehemently in the opposite direction. The Jewish People are again quickly becoming the scapegoats of humanity.
This why I rejoice when I find out about the project spearheaded by the UNESCO in France. This educational and cultural project is organized to invite people from around the world to educate themselves about the Shoah and to put to rest the erroneous notion that the Holocaust never happened. Many muslims are invited to participate in an effort to curb their false understanding of the darkest event in mankind.
I rejoice at how France is being pro-active about this and my prayer is for many countries to join, especially in Europe. (full article from Haaretz here)
Some might say that it is too little too late, but I say that even a little to fight the Holocaust deniers is better than the chronic apathy that has characterized the world’s community for the last several decades.
NEVER AGAIN!!!!!
In memory of the death of my maternal grandfather Maurice Weinzveig in Auschwitz.
1,771