Home » Blog » If Trump is the “New Hitler”, Israel and the Jews Are Very Safe!
Spread the love 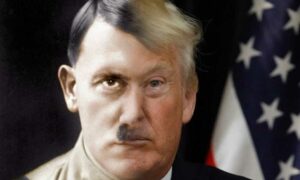 In my 35 years in this country, I have never seen so much hatred for an American president in office as we are witnessing against President Trump. My desire is not to blindly come to his defense simply because I agree with his policies, but I feel compelled to respond to an accusation that was made recently. I am still having a hard time acknowledging that such an accusation was made against Donald Trump, but since when it comes to faulting him, anything goes, we shouldn’t be surprised.

MSNBC host Donny Deutsch recently compared President Trump to Adolf Hitler, warning Jewish people that they shouldn’t vote for him in the next elections. Mr. Deutsch who is “conveniently” Jewish when he needs to promote a selfish agenda of “Trump-hatred” said, “But what was going on in the early ’30s Germany? Basically you had a destruction of belief in the free press, you had blurring between the executive branch and the Justice Department, you have creating an other, whether it’s Muslims, whether it’s Mexicans, whether it’s congressmen who weren’t born in this country, and then you have the destruction of free elections. And we’re here and what is the difference between Adolph Hitler and Donald Trump? I’m not saying there is a Holocaust but when you look at the tactics, that is where we are right now,” Deutsch said before attacking Jewish people who plan to vote for Trump.”

As if this wasn’t enough of a stab, he continued, “With what our people have gone through in history, and you see a man who is a dictator, and once you give a man absolute power he’s possible of anything, and if you are a Jew in this country and you are supporting Donald Trump, you are not looking back at our history and you are blind and you are walking like a lemming off a cliff…. it’s “time to wake up because there is no difference from Trump’s rhetoric and what Hitler preached in the early 1930s.”

So, according to Mr. Deutsch, “there is no difference from Trump’s rhetoric and what Hitler preached in the early 1930s.” Incidentally, if such an accusation was made in France or Germany, the accusing party would be sued for defamation. American freedom of press and freedom of speech are such that comparing one to Hitler is acceptable. Hitler was a dictator; a mass murderer and he was evil. We absolutely shouldn’t say that Hitler was insane because insanity is a mental state that mandates acceptance if not forgiveness. Hitler was evil, period! To compare President Trump to Hitler in 2020 is unfortunately pretty safe because people are so far removed from World War Two and the Holocaust that the stigma remaining attached to Hitler’s name is enough to make them hate Donald Trump without checking any of the facts. According to Hitler’s biographer Ian Kershaw, “Never in history has such ruination – physical and moral – been associated with the name of one man.”

Donny Deutsch is banking on the shock value of his statement and he is also counting on the ignorance of his audience to be able to buy such an outrageous claim. It is terrifying to hear that a 2018 study determined that 66% of millennials and 41% of adults didn’t know what Auschwitz was. So, Mr Deutsch has a captive, uneducated audience. His goal is to convince 2020 Jews that voting for President Trump is akin to keeping the new Hitler in office.

It is time to see if that comparison is valid on any level. While most people will agree that Hitler was a mass murderer and a dictator, they might not be aware of the extant of his evil deeds. He started to develop his plan to eliminate the unwanted when he was in prison after the failed coup in Munich in 1923. There, he wrote Mein Kampf in which he clearly explained his plan to bring Germany to the top, at the expense of other countries and people groups. Nothing and no one would stop him. But Hitler didn’t just go after the Jews, he wanted to eradicate anyone who didn’t fit the Aryan mold of the perfect Germanic race. Jehovah’s Witnesses, homosexuals, retarded people and Gypsies were among the groups that he first targeted. His racial obsession was based on the science of Eugenics that aimed to improve the genetic quality of people by eliminating people and/or groups deemed to be inferior. That “pseudo” science was debunked very quickly, giving Hitler no scientific leg to stand on, but that didn’t stop him, did it?

As to the Jews, he was obsessed with their annihilation. In 1933, the German Reichstag voted and passed the “Enabling Act” and as a result, the Weimar Republic gradually morphed into Nazi Germany; a totalitarian dictatorship anchored in the  ideology of National Socialism. He was now in charge of making all decisions. Soon after, Hitler declared a national boycott of all Jewish businesses. Within two years, in September 1935, the “Nuremberg Laws” were enacted, and almost overnight, all Jews became untermenschen, or “subhuman.” They became like vermin to the Nazi Party and they had to be exterminated. More laws came, more restrictions were put in place, and keeping Jews contained became a necessity for Hitler. The Ghetto (born in Venice, Italy in 1516) was reintroduced. For a short while, and under extremely unhealthy conditions, Jews were contained in ghettos all over Eastern Europe like Lodz and Warsaw. Death by disease was running rampant. But containment didn’t suffice. All along, Hitler was seeking Lebensraum (living space) for the German people. The Jews either had to leave if they could, but many couldn’t, or simply didn’t know where to go as many countries refused them entry. Extermination of the Jews and all other unwanted people became the only viable solution for the Führer. Over 12 million people died in Hitler’s camps (6,000,000 of them Jewish), but enough about Hitler.

Let’s examine Donald Trump’s record for the last four years. He said that he was going to move the US embassy from Tel Aviv to Jerusalem and he did. He fulfilled an empty promise made by many previous presidents from both sides of the aisle. He also has members of his own family who are Jewish, and he is very proud of that. Soon after coming into office, he stopped sending money to the Palestinian Authority because of the terrorism agenda that they kept and their unwillingness to negotiate with Israel. He also removed the Palestinian presence from Washington, DC. He officially recognized Israeli sovereignty over the Golan. He defunded the United Nations Relief and Works Agency (UNRWA), and of course recently, he was instrumental in bringing about the first Middle East peace treaty between the UAE, Bahrain and Israel since Israel and Jordan signed theirs in 1994. So, if Trump is the new Hitler, Israel and the Jews are very safe!

In the meantime, the neo-democrats are teaming-up against the Jews with all they’ve got. They are promoting and supporting BDS, terrorism and antisemitism. The antisemitism spewed by Congresswomen Ilhan Omar (voted worst antisemite of 2019 over Louis Farrakhan) and Rashida Tlaib should be more than enough to force them to resign from their US government positions. The BLM movement has attracted people in search of a way to express their support for the injustice against George Floyd. In the process, they are ignoring the fact that BLM is laced with antisemitic ideology.

The attraction to support social justice and the underdog has led Jewish people in America to vote Democrat for decades. In American Thinker Alexander Markovsky and Ted Belman explain, “The idea of social justice, in terms of helping the sick and the poor, is deeply embedded in Judaism. Living in ghettos and being persecuted for two millennia, the Jewish people have been struggling to reconcile their tragic history with contemporary reality. The experience has led them to take on and support the cause of every underdog and liberal movement in sight, no matter how unworthy, no matter how illogical or no matter how it imperiled their own interests or safety…The social justice crowd is not motivated by concerns for Israel and they are not motivated by the interests of the United States. Their obsession is social justice which they believe is not currently available. They believe that this can best be achieved through socialism and wealth redistribution.”  As a Jew myself, I understand the attraction to vote Democrat in the hope to find social justice, but maybe 30 years ago or even more, when the vast majority of Democrats actually cared about Israel and the Jews.

Additionally, the fear of the Jewish community to vote Republican rests on the false premise that the Right comprises fascists, bigots, racists and antisemites. While I am sure that you can find some of these people in the Republican Party, ideologically, this might have been truer half a century ago. The real danger for Jews today is the party that they blindly support. The one that doesn’t want to recognize Israel’s right to the land, supports Boycott, Divestment and Sanctions (BDS) without checking the facts and continues to accuse the Jews with the same antisemitic tropes going back to the Middle Ages. The Left in America today has morphed into an extreme Left that is very toxic for all people who cherish freedom of speech, religion, the press and free enterprise.

Wake up Jewish community! The 2020 Left isn’t the Left of JFK anymore, and I dare you to find a 21st Century version of Reverend Martin Luther King and Rabbi Abraham Joshua Heschel locking arms and marching against racism and injustice. Marxism in America or anywhere else isn’t good for anybody in general and the Jewish community in particular. So, again, as odd as some might think, if Trump is the “New Hitler”, Israel and the Jews are very safe. Hitler and Trump have nothing in common. They are opposite in their ideologies. The fact that I even have to defend President Trump from that accusation shows you how far the Left is willing to go in 2020!