When it comes to European anti-Semitism, France is often leading the pack with both creativity and virulence. It is always with great sadness that I write about my country of origin and what appears to be its chronic descent into the bottomless pit of Jew hatred.
I recently chronicled a brief overview of French anti-Semitism in three parts (Part I, part II and part III), positing that it didn’t happen in a vacuum but grew over 2,000 years. The theological differences of yesteryear turned into laws, leading to warped thoughts, followed by actions and eventually culminating in the unnecessary death of millions of innocent souls.
The current Jewish community of France is getting organized to leave the country of “Liberté, Égalité, Fraternité”. Statistically, France might loose as many as 8,000 Jewish people in 2014. But this is much more than a statistic, it is symptomatic of a trend proving that France is no longer safe for Jews.
The pro-Palestinian stance taken by France is so prevalent that some have given-up on fighting it. They have decided to pack-up and leave. But not all Jews will depart the country that still holds the third largest Jewish community in the world.
One would think that having recovered from the Nazi invasion and the Vichy government, France would humbly but diligently endeavor to make its Jewish community feel welcome. On the contrary, I never cease to be amazed at the new ways that France will find to surpass its own despicable acts of Jew hatred.
It was only last July that a Paris street protest in favor of Hamas and Palestine turned sour and branched out towards the rue de la RoquetteSynagogue where 200 Jewish worshippers were gathered. By God’s grace a pogrom was averted, but until when?
Yet, just a couple of weeks ago, while the French government performs its usual hypocritical game of semantics to reassure the Jews of France that they are safe there, something took place to prove the opposite. At the end of the day, the old adage stating: “actions speak louder than words” still holds true.
France might have cringed at the recent Russian announcement to hold a social network “Miss Hitler” Beauty Pageant, but the ugly staunch of hypocrisy was present all along. President Hollande might appear to be the friend of Israel, yet prime minister Laurent Fabius is considering recognizing Palestine in a move unprecedented in the European Union (following Sweden and the UK).
The French president made a strong statement in 2012 in the company of Mr. Netanyahu at a ceremony remembering the Toulouse massacre victims. He said that: “the Jews of France must be aware that the republic will do everything it can to protect them and to give them security…Their security is in the national interest of all the French.” So where was Mr. Hollande when he needed to put his foot down to stop this recent despicable act of anti-Semitism?
It was just a couple of weeks ago that a man who killed Jews was honored in France, but not just remembered as a “victim”, “militant” or “martyr” for the cause of Palestinians, that of course would be an insult to many already. Instead, in order to make the Jewish people more secure in a very volatile France, a street was named after that man!
The man in question is Marwan Barghouti known as an arch-terrorist who since 2004 is serving five consecutive life sentences in an Israeli prison for the death of five Israelis. Barghouti still exercises much control over Fatah from his prison cell. He is credited for having led the first and second intifadas. He is seen by many as the most likely leader to replace Mahmoud Abbas who has exceeded his 4-year term by several years. Mr. Barghouti is a terrorist, a murderer and an anti-Semite.
The city of Valenton on the east side of Paris, in the Val-de-Marne regionjust recently named a street “Allée Marwan Barghouti” because, according to its communist mayor Mrs. Françoise Baud, Barghouti is: “the face of the unwavering resistance of the Palestinian people against the occupation, the crimes, the destruction, the apartheid and the colonization perpetrated by the Israeli government.”
As the street was inaugurated, a sign was revealed by the Mayor that read:Alley Marwan Barghouti, Palestinian deputy, activist, arbitrarily imprisoned in Israel, “The Palestinian Mandela” is an honorary citizen of Valenton. 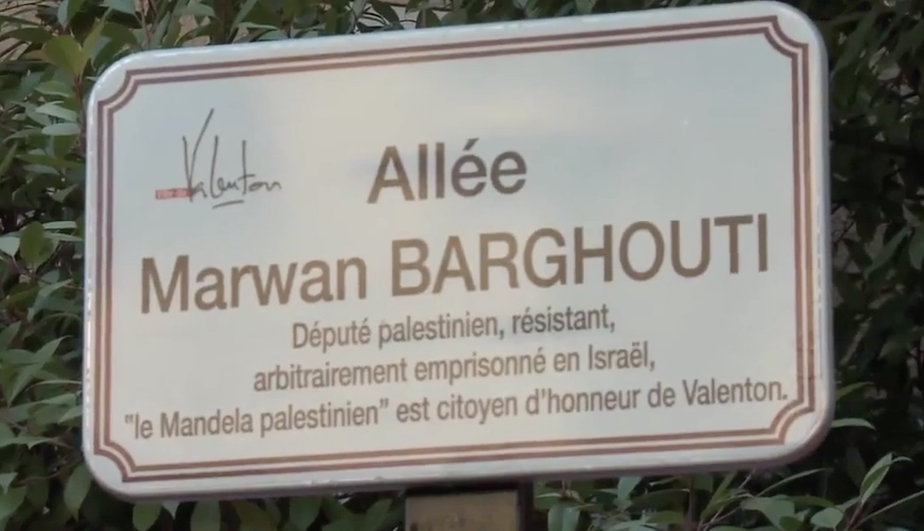 I am still trying to understand how anyone can be “arbitrarily imprisoned” after killing five people? This decision by Françoise Baud was followed by a three-page letter she sent in response to some of the criticism she received. Unfortunately for most of my readers, the letter is in French but it comprises a series of excuses for the mayor’s action in the name of peace and of course a two-state solution. Additionally, Mrs Baud is trying to get her city council to adopt the Palestinian refugee camp of Balata near Nablus as a sister city to Valenton.
Barghouti, Abbas, Hamas and 80% of all Palestinians DO NOT WANT PEACE with Israel but all Jews dead. Has the mayor been misled, lied to or is she deceiving us into believing that Israel is the only problem in the way of true peace in the Middle East?
By elevating a terrorist to the status of hero, Valenton and I am afraid much of France have validated murder, terrorism and hatred against Israel and the Jewish people by proxy. If all it takes to get a street named after you in France is the murder of a few Jews, Mohammed Merah (the Toulouse massacres) will get his street soon and Hitler should get a highway or maybe even an airport named after him.
In the meantime, and for reasons that are becoming clearer by the day, Jews are leaving France in droves.