Home » Blog » Fighting the Darkness of Anti-Semitism One Candle at a Time!
Spread the love 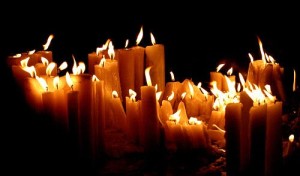 The 5th Global Forum for Combatting Anti-Semitism took place in Jerusalem on May 12-14, 2015. The theme was: “The Oldest Hatred in the Newest Vessels: Confronting Antisemitism and Hate Speech on the Internet and in Social Media” and “The Rise in Antisemitism in Europe’s Cities Today: Means of Response”. This is a conference that is organized by the Israel Ministry of Foreign Affairs to study, expose and fight global anti-Semitism.
Prime minister Benjamin Netanyahu delivered the opening speech in Jerusalem at the same time that European Jewish leaders convened in Toulouse, France for the biennial Conference of European Rabbis. There is no doubt that anti-Semitism’s recent global spike is causing great concern amid various Jewish communities as well as within the ranks of those who understand racism and human rights.

Mr. Netanyahu delivered a sobering message pointing to the urgency of the matter as well as the irrationality of the “Oldest Hatred.” I concur, as I have said for a while now that anti-Semitism, and especially the new hybrid that I have called “Eschatological Anti-Semitism” or “End-Times Anti-Semitism” is an irrational hatred of Israel and the Jewish people. It comes from all fronts with accusations that are so ludicrous that they would be comical if their goal wasn’t to destroy a people group and a sovereign state. Consider a few of the most recent headlines:
• ICC Threatens Israel to Provide Information for Probe: ICC prosecutor says if Israel does not hand over information on Gaza op, she will be forced to open full-scale ‘war crimes’ investigation.
The International Criminal Court in The Hague is far more focused on demonizing Israel than probing Hamas, Iran, Syria or Yemen. Logical or irrational?

• Top Khamenei Advisor: We Have Divine Permission to Destroy Israel
This is coming from the country that is currently building a nuclear arsenal arrogantly and as the world watches. There is no viable deal short of preventing them from building a bomb. Their genocidal drive against Israel doesn’t seem to worry anybody. Logical or irrational?

• Israel Used Aid Mission to Nepal As Cover for Baby Trafficking
The recent tragedy in Nepal has drawn the attention and sympathy of many including Israel, and so it should have. As a matter of fact, 30% of the rescue/medical help came from Israel while Israelis only make up less than 1% of the world population. Where was Iran? Where was the Palestinian Authority? So let’s accuse Israel of having a cover-up agenda hidden behind their humanitarian help! Logical or irrational?

I could keep going with many more headlines but you get my point. Mr. Netanyahu clearly brought it up when he called it a travesty: ” Now, thousands are being killed in the brutal conflict in Yemen. You see any demonstrations in London or Paris? A quarter of a million people have been savagely butchered in Syria. You hear any word of academic boycotts on the Assad regime? And in Iran now under the Rouhani government, executions have gone up, innocent people are taken to death. You hear any UN resolutions condemning these violations of basic human rights? And the answer regrettably is no. The demonstrations, the boycotts, the resolutions are all reserved for the Middle East’s one true democracy, in fact it’s the most beleaguered democracy on earth – Israel. This is a travesty.

Then he went on to say that it all starts with education and here again I couldn’t agree more. In my fifteen years of work on the subject, I have been shocked, over and over by some of the comments I heard from people about Israel and the Jewish people. Some of these comments coming from very bright people and/or Bible believing and Bible reading evangelicals. So I continue to take it upon myself to clarify the misconceptions and debunk the stereotypes as much as I possibly can, and so should you!

What Mr. Netanyahu added to the need for education, was the fact that even when we educate people we cannot fully eradicate the problem of anti-Semitism. It is deeply rooted in the willingness to slander, he said. I would add that in many cases it goes beyond willingness to slanders, and crosses the line over to desire and even obsession: “So education and knowledge may be a partial protector against this slander, but there’s something deeper here because these are such patent falsehoods. It is the willingness to submit to slander, the willingness to believe this. This is what creates the ground, and it starts not from the bottom. It starts with the elites. And that’s where it has to be challenged. And today the treatment of Israel is no different from the treatment of our forbearers. The Jewish state is being treated among the nations the way the Jewish people were treated for generations”.

It is so important to continue to speak up against anti-Semitism and all kinds of xenophobia. It is important but unfortunately increasingly unpopular. It seems that one’s level of tolerance, multiculturalism and liberalism is now measured by how deep their disdain for Israel and the Jewish people is. We might never be able to completely eradicate anti-Semitism–at least before we see the Messiah. This doesn’t exonerate us from fighting it.
Mr. Netanyahu ended his poignant speech by retelling the story of the day he met the Lubavitcher Rebbe Menachem Schneerson and was taught a lesson in courage and endurance: “When I came to the United Nations many years ago to serve as Israel’s ambassador, I met a famous Jewish religious leader, the Lubavitcher Rebbe, and he said to me: You know, you’ll be going into a house where many, many lies will be leveled at Israel and at our people, and he said, ‘Remember that in the darkest halls, if you light one candle, then people will see the light of truth for a very long distance. They’ll see it from afar, and your job’, he said to me, ‘is to light a candle of truth in a dark hall.’ Well, I’ll tell you, we need a lot of candles, a lot of lighters of candles, and that’s how I see you”.

When it comes to fighting anti-Semitism, each one of us can play our part. We do not need to be at a global forum in Jerusalem or a conference in France. The darkness of anti-Semitism is all around us and is advancing like an inkspot on porous paper. Each one of us is a lit candle in the hall of Jew hatred. Please do not let political correctness blow you off.

The prophet Isaiah tells us that Zion will shine one day because of God ‘s glory. He also tells us (Isaiah 52:13-53-12) that the hope of Israel can only be in Messiah Who would suffer for His people as Mashiach ben Yoseph, yet also reign in Yerushalaim as Mashiach ben David.
As we wait for that day when light will prevail, let us keep our individual candles lit.

“ Arise, shine; for your light has come, And the glory of the Lord has risen upon you.
“For behold, darkness will cover the earth And deep darkness the peoples;
But the Lord will rise upon you And His glory will appear upon you.
“ Nations will come to your light, And kings to the brightness of your rising.
Isaiah 60:1-3