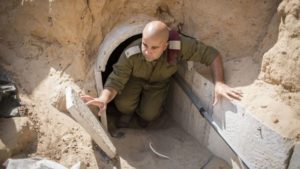 The Evangelical Christian charity known as World Vision was founded in 1950, to become World Vision International (WVI) in 1977 and currently serve 97 countries worldwide. Their humanitarian work has become the hallmark of Christian love and aid over the decades, so much that their yearly revenue nears $3 billion. Their published mission statement says “World Vision is an international partnership of Christians whose mission is to follow our Lord and Savior Jesus Christ in working with the poor and oppressed to promote human transformation, seek justice, and bear witness to the good news of the Kingdom of God.”

In early August 2016, Israel’s internal security service (Shin Bet) accused World Vision Gaza office manager, Mohammed El Halabi of using up to $50 millions of charity funds to pay Hamas fighters, build tunnels and buy weapons. He was arrested in June and detained for fifty days before the accusation was made public. The Shin Bet claims to have more than sufficient proof that will be produced in court. If this accusation turns out to be true and indeed Mr. Halabi did funnel funds from World Vision that had been donated by well intentioned Christians globally, it would take years for World Vision to recover if at all possible.

If the verdict exonerates WVI, the damage will remain, and it raises many questions about WVI methods for fund-raising, accountability and financial integrity. World Vision claims that the total budget allocated to Gaza is about half of what Mr. Halabi has been accused of funneling to Hamas. But does the amount really matter? When the truth is finally out, will it matter if fifty, twenty or even one million where funneled? What will really matter will be the motives of Mr. Halabi and/or World Vision.

Over the years, World Vision has shown some signs of unequivocal bias for the Palestinian narrative as well as some poor accountability choices. This makes the rumor of funds embezzlement by Mr. Halabi harder to dismiss as a set-up or a gross misunderstanding. Consider a few facts about World Vision:

• When the Palestinian movie “With God on Our Side” came out in 2010, It was endorsed on the front cover of the DVD by World Vision, Steven W. Haas (then VP of the organization). His endorsement read “I dare anyone to see this film and remain unchanged.” To World Vision’s credit, the endorsement is no longer there and they have even issued a statement declaring that they no longer support the movie. Yet, the endorsement remained on the front cover for a while, making one wonder what made World Vision decide to stop supporting that project and why it took so long to see that the movie claiming reconciliation between Israelis and Palestinians is nothing more than a Palestinian propaganda piece?

• On the World Vision website, all the countries helped by the organization are listed. While Palestine and/or Israel are not listed by names, “Jerusalem/West Bank/Gaza are listed. Jerusalem and Gaza could be considered the best neutral way to describe these two areas without taking sides, but the area called the West Bank (West of Jordan, including East Jerusalem) is another name for Judea and Samaria. Israel calls it Judea and Samaria while those who believe that Israel occupies the territories call it “The West Bank.” To remain neutral, WVI could have called it The West Bank/Judea and Samaria. They made a clear choice in their labelling.

• in 2007, World Vision International, which by all standards is NOT A CHURCH, decided to change its fiscal status to a “Church Status” enabling them to no longer file the IRS form 990s. This form, required by the IRS of all non-profit organizations, forces them to disclose a lot of financial details to the IRS and to their donors. By changing their status to a church, they limit the amount of financial information they have to share. But WVI is not a church in the biblical sense of the word. It is an NGO (non-governmental organization.) It even belongs to the International NGO Charter of Accountability (INGO Charter.) Additionally, in a recent article about WVI decision to allow same-sex marriage to their employees, WVI CEO Richard Stearns clearly stated “I want to be clear that we have not endorsed same-sex marriage, but we have chosen to defer to the authority of local churches on this issue.” So which is it World Vision? Are you a church organization when it comes to fiscal accountability and are you not when it comes to same-sex marriage?

All these elements related to the reputation of WVI give us a picture of a shady organization with less integrity that they would like us to believe they have. WVI operates on a very large budget, mostly from Christian donors with a humanitarian burden. The Hamas allegations might be false. If true, they might be outside of WVI knowledge, yet the mode of operation chosen by the humanitarian organization creates a lot of doubt as to their integrity. World Vision is going to have to come clean and be consistent in the way they manage their finances, or they will lose big. But at the end, the ones truly affected by World Vision less-than-perfect financial integrity are all the people from almost 100 countries served by the NGO, even including some of the Palestinians in a region characterized by abuse, corruption and violence.