Home » Blog » Do We Still Need to Explain the Swastika in 2020?
Spread the love 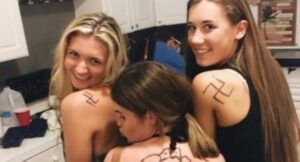 Apparently, the short answer is YES, and it is unfortunate. The swastika is an old symbol that was hijacked by Nazi Germany and should have been retired in 1945 at the very latest. It goes back thousands of years in history and is meaningful to Buddhists, Hindus and a few other Eastern religious groups. The symbol was mostly seen as a good luck symbol until it was discovered in a few different places including German pottery. Before you knew it, the swastika was assigned the meaning of the “pure Aryan race”, leading to its usage on every Nazi medium possible as often as they felt it necessary. It was adopted by the Nazi Party in 1920 and replaced all other flags by 1933.

While the original design can still be found in other cultures, clearly predating the Nazi era, there is an unspoken international agreement that the swastika was retired at the end of World War Two. It is also understood that the counter-clockwise symbol is the original one from Eurasia, while the clockwise one is the one adopted by the Nazis. I am not sure that the girls knew the difference. Would a business person making a new kind of fun shaped caramel crackers, call and market their products as “Krazy Karamel Kracker”, taking the chance of being remembered as the KKK candy manufacturer? Of course not, because anything that would create the KKK acronym has also been retired from the vocabulary of decent people.

So, I was very disturbed when I was made aware of a couple of Penn State students who recently took a picture of themselves and posted it on Twitter, both displaying a drawn swastika on their shoulders, while smiling at the camera. The message that they tried to convey was unclear, but the symbol they used was crystal clear. There has not been an answer or explanation from the students using the symbol. Silence can be a wise choice at times, but when accused of using an unequivocally antisemitic symbol, silence is not the appropriate answer. The use of that symbol by the students can only be explained in one of two ways: Ignorance or malice. Maybe a little bit of both is even more accurate.

I always like to give people the benefit of the doubt, so I will first assume that the two girls didn’t have any idea of the weight that this symbol carries. I personally don’t think that it is the case, but it is always possible. If it was the case, it will validate why we still need to educate people about this dark period of human history.

I am more inclined to believe that they knew the meaning of the symbol, thought that it was cool for shock value, and didn’t really care if they offended anyone. If that was the case, it could still be argued that they don’t really understand the gravity of such a symbol. Unfortunately, there seems to be a resurgence of the use of the swastika symbol among teens in America.

Then, there is the possibility that they simply are antisemitic and wanted to display their xenophobic ideology online to the world. This remains unclear since they have made no comments during or after their actions. The blond student on the left (Ryann Milligan) happens to be a Rehabilitation and Social Services major, where she will be trained to help people and be an advocate for others…Scary! Maybe it is still time to switch majors?

Penn State did issue a statement condemning the girls for their actions: “The reported anti-Semitic post is deeply disturbing and sickening. The University is contacting the individual alleged to be involved. We will continue to speak out against hatred and intolerance.” I personally find their statement extremely vague and non-committal at best. There is also a petition going around to expel the students, and it has already garnered almost 100,000 signatures. Penn State also tweeted: “A public university does not have the power to expel students over speech, no matter how morally reprehensible it may be, but the university does have the power to condemn racism and address those who violate our values.”

It is uncertain if the students will be disciplined or not, but what I can guarantee you is that regardless of malice, ignorance and discipline, they need to be educated. They need to take a trip to Auschwitz or at the very least to the US Holocaust Memorial Museum in Washington DC. They also need to read Elie Wiesel “Night”. If that is too much to read for their millennial brains–and I say this without malice as millennials have a different way of gathering and retaining information–maybe they should watch “Schindler’s List” or the French documentary “Nuit et Brouillard” (Night and Fog) filmed in 1965.

I too often hear people complaining about the fact that Jews talk too much about the Holocaust, that we are “obsessed with its memory.” Well, I might not be obsessed by its memory, but I lost my grandfather in Auschwitz, and I am greatly offended when a couple of American teenagers make light of the very symbol that represents the people who killed my grandfather within a total of twelve million innocent victims, six million because they were Jews (1.2 million of these being children.)

So don’t tell me we need to tone down Holocaust education, we need more of it! As a matter of fact, I welcome the fact that H.R. 943, “The Never Again Education Act” was signed into law on May 29th, 2020. It was introduced, as the text says , “To authorize the Director of the United States Holocaust Memorial Museum to support Holocaust education programs, and for other purposes.” Section 2.4 of the Bill delineates exactly why it is important to educate people about those events, and it sounds like it could have been directly addressed to the three Penn State students. It reads, “As intolerance, antisemitism, and bigotry are promoted by hate groups, Holocaust education provides a context in which to learn about the danger of what can happen when hate goes unchallenged and there is indifference in the face of the oppression of others; learning how and why the Holocaust happened is an important component of the education of citizens of the United States.”

This is a huge milestone in Holocaust education and a win against those who belittle the Holocaust, make light of it and even those historical revisionists who deny that it ever happened. But if Holocaust education happens in the classroom, it starts and continues in the home. Parents are responsible to instill in their kids the values that are morally right. Sad to say, but we still need to explain to some people what the swastika represents, and seventy-five years after the Holocaust, we shouldn’t have to! Unfortunatelly, as long as people use the swastika like a cool tattoo to be paraded online or anywhere else, we need some of us to tell them that they are dead wrong. They are targeting the Jewish people even if they don’t realize it.
This being said, we must respect all human beings created in God’s image, especially at a time when our country is so divided by racial inequalities. But let us not let the xenophobia of some become the guilt of all.