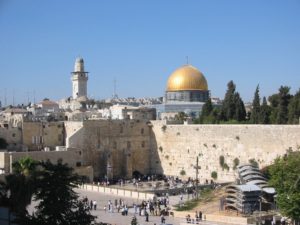 In a series of moves that clearly indicate contempt for both Christianity and Judaism, UNESCO voted to erase all Jewish connection from the Temple Mount. The decision didn’t happen in a vacuum as UNESCO has a history of anti-Israel bias, but the latest move against the holiest Jewish site will have serious ramifications.

I could spend time presenting a series of evidence for a Jewish Temple and Temple Mount from the Bible, archeology and even secular history (including some from the Muslim side). The proof would do little to convince those who already know that Temple and its surroundings were and still are Jewish sites, and it would do absolutely nothing to change the mind of those who have delegitimized it.

Re-writing history has been elevated to an “art form” by the Palestinian Authority and its cronies. It has taken about fifty years for the Palestinian narrative to become undisputed truth, but Yasir Arafat, the father of “Palestinian Self-Determination” would be very proud of the work of his successors since his death in 2004.

The first thing that we must realize is that the re-labelling of the Temple mount really has nothing to do with any new historical evidence or artifacts recently discovered. If that was a fact, an even stronger case could be made for the Jewish connection to the Temple Mount. In reality, UNESCO most likely doesn’t care much about the Palestinian connection–or lack of–to the Jewish site. UNESCO is mostly interested in whatever can be done to delegitimize Israel’s connection to the land, whatever the cost, whatever the lies and whatever the consequences.

Several consequences will be felt by this recent vote. They could affect Israel in particular, Jewish people at large and even Christians and Westerners in general. We shouldn’t underestimate what just took place.

The world is increasingly turning its back on Israel (Joel 3:1-2, Zechariah 12:1-3; 14:2, Daniel 12:1). While this shouldn’t be a surprise to those who value biblical truth and the prophetic passages of the Tanach (Jewish Bible), this is very upsetting. Outside of Egypt and Jordan, the whole Middle-East is pretty much at war with the Jewish State. To my surprise, even Jordan (joining the Palestinian Authority), was behind the agenda for promoting such a nonsensical vote. This is very telling at a time when so few countries support Israel, for Jordan to be somewhat of a backstabber.

But the UNESCO vote was not only telling by those who promoted its agenda and those who voted in favor (24 Yes/4 No). It was even more telling because of the 26 countries that abstained. Was it too political of a vote–as it should be– or was it simply that they didn’t want to be caught in the middle of a crossfire between Israel and her enemies. The resulting apathy is equally appalling. Generally speaking, the world has been suffering from “Middle East Fatigue” for a while now, so when UNESCO pretty much voted Israel off the map, the vast majority of the world yawned and changed the channel.

The more pressing issue is the validation of the Palestinian agenda in connection with the Temple mount and it incessant Jewish presence. Palestinians now have UNESCO on their side, as they justify more violence in a possible near future. Who could disagree with pushing Israel the “occupier” off a Palestinian holy site? I am talking about a possible Third Intifada. If that indeed takes place, Jewish blood would end up on the hands of UNESCO, but do they even care?

The few remaining friends of Israel, individually and corporately should be very vocal about this latest turn of events. Not because it happened, since I am convinced more will take place to delegitimize and demonize Israel. We should be vocal because nobody else is. If nothing else, if you want to join me and sleep well at night without the guilt of looking the other way while Israel and the Jews are again being singled out, then speak up please.

Israel always had God on her side. The same God who allowed for the Jewish Temple to be built by Solomon (1 Kings 6, 2 Chronicles 3, Psalm 134. 138, 146-150) and allowed for it to be remodeled and rebuilt under Herod the Great, will protect Israel from destruction (Jeremiah 31:35-37.) He is also the God who will judge the heart of those within UNESCO who repeatedly throw Israel under the bus.

This vote had absolutely nothing to do with world heritage preservation and everything to do with an antisemitic agenda cloaked in Education, Science and Culture (the E.S.C of UNESCO.) Will the world yawn again if the Palestinians start a third Intifada? Of course not…They will blame the Jews for it. After all, don’t the Jews occupy Palestinian soil and usurp a Palestinian holy site for their colonizing purpose? If you believe that, I have a bridge to sell you in Brooklyn, but you better stand in line because you are not the only potential buyer!