You are here: Home / Antisemitism / Comic Book Anti-Semitism Not so Subtle!
Spread the love

At first, one could think that this story was taken straight out of last week Saturday Night Live line-up. It could almost be funny if it wasn’t so blatantly antisemitic.

An aryan looking blond superhero with yellow cape and blue tights, named “Foreskin Man” is coming to the rescue of innocent babies being circumcised by evil looking “Monster Mohel”. 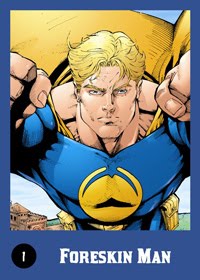 The mohel (rabbi certified to perform circumcision) appears with claws, clutching scissors and taking pleasure in circumcising babies, depicted in an cultish set-up 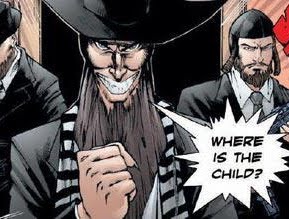 There is nothing subtle about this. It is antisemitic on so many levels that one wonders if it wasn’t taken straight out of Joseph Goebbel’s archives of Nazi propaganda. The ADL rightfully said that the character “Monster Mohel” portrayed mohels as “rapacious, bloodthirsty and bent on harming children.”
As if this wasn’t enough, there is also another character depicted as a scalpel armed bloody brute helping the mohel in his torture of innocent children. His name is Dr. Mutilator. 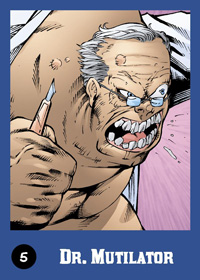 This whole comic book project (book, cards and merchandise for sale on their website) was born out of a growing concern about child circumcision. There is a group in San Francisco (www.mgmbill.org) working on passing a law to ban male circumcision until the age of 18. While they have the right to express their disagreement regarding the practice of child circumcision, the antisemitic character assassination attached to the topic is boldly taking antisemitism back to the pre-Holocaust caustic levels.

What I find very interesting is that after reading the Bill proposed to the U.S. congress in January of 2011 (www.mgmbill.org/usmgmbill.htm) , I found absolutely no mention of Jews, Judaism or religious circumcision anywhere. The bill appears to be a generic attempt at stopping an act that the signers deem to be an unnecessary painful mutilation in general, so tell me why in the world do they ONLY use a rapacious, blood-thirsty and evil looking caricature of a rabbi to convey their message? And why do they add a religious theme to it?
Another question we must ask ourselves is this: “Why aren’t muslims mentioned or used in the comic book since they practice circumcision as well?” How about “Evil Imam” as a character? Is the creator of the comic book afraid of repercussions from CAIR or the muslim community?
I am afraid that the reason why muslims are absent is too obvious, they are not the target.
It is clear that the target is not so much circumcision as it is the Jewish people.

Yet another attempt at demonizing the Jewish People in the eyes of the uneducated masses!
What is next, forbidding the manufacturing of Passover matzah because somebody has claimed that Christian blood was used in the process? Well, I wouldn’t put it passed the liberals!
As our world is making its way through postmodernism, it seems that for the Jewish people, it is more like the middle ages all over again!
Help Us by Sharing