You are here: Home / Antisemitism / Can ISIS ever be defeated?
Spread the love 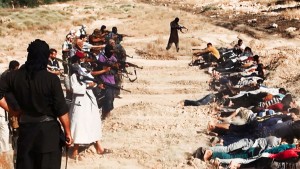 It is with bewilderment, disgust and fear that our global community has become an audience to the bloody carnage inflicted by ISIS within the boundaries of their ever-growing “Caliphate.” On February 17, they set 45 people on fire in Iraq, adding to the gruesome death toll of the last few months. It wasn’t long ago when they set a Jordanian pilot on fire inside a cage and filmed it as if the act was scripted and planned. They also beheaded Japanese and European people among others, not to mention all the Christian beheadings like the recent 21 Copts in Libya. How far will they go and can they ever be defeated?

Before attempting to answer such a question, we need to understand the ideology behind the bloodiest jihadist group in modern history. Unfortunately, almost every attempt made recently could be compared to studying a bird as if it were a fish. It just cannot yield beneficial results. ISIS truly is in a league of its own and should be handled as such. In a previous post, I explained that they are organized, wealthy and weaponized. In and of itself, this already places them outside of your run-of-the-mill terrorist groups like Taliban, Al-Qaeda or Boko Haram. Yet they are unique in several other ways.

A Caliphate
ISIS’ name in Arabic is al-Dawlah al-Islāmīyah fī al-ʻIrāq wa-al-Shām meaning the Islamic State of Iraq and the Levant (The Levant being another name for greater Syria). They have only been around for about 15 years and mostly as a branch of Al-Qaeda, but they even became too extreme for Al-Qaeda. This would go along the lines of Hitler rejecting a group of soldiers because he deemed them too brutal to join the Nazi Party!

So ISIS flew the coop, and after Al-Qaeda officially severed all ties, their leader Abu Bakr al-Baghdadi (in charge since 2010) declared that he was the new caliph and that as such, he was now ruling all Muslims within a newly formed global Caliphate. To date, the introduction of a new Caliphate has been far from welcome by various Muslim countries. Nevertheless, it creates a new dynamics not only for the West but within Islam as well.

All terror groups until ISIS were underground and decentralized. ISIS is territorial, and under an Islamic Caliphate, it can only function as such. Thus it is in their interest to gain ground. As little as they might get and as slow as they might move, they must press on. ISIS will continue to move in the Middle East and spread from its epicenter like a bleeding wound on a piece of cloth as the world weakens.

Another aspect of a caliphate is the fact that the one who implemented it is seen by his followers as the unique ruler or “caliph.” He controls all Muslims globally. Of course, there are millions of Muslims who want nothing to do with the Islamic State, but according to ISIS’ exegeses of the Qur’an, if they indeed call themselves Muslims, they must submit to the caliph and his ruling or die as infidels. This puts all Muslims who are not adhering to all of ISIS’ ideology at risk since denying the holiness and inspiration of the Qur’an as they [ISIS] view it is pure apostasy.

Therefore, as anti-Semitic as they are, ISIS will not hesitate to decimate Hezbollah or Hamas who they do not consider in compliance with their views, before they even go after Israel. So apparently, even though it always is borne out of a specific interpretation and application of the Qur’an, Jihadism is far from being monolithic. But the point is that even though Israel and the West are constantly in the crosshair, there are obvious disconnects between, let’s say; the Taliban, Al-Qaeda and ISIS.

An Islamic Apocalyptic Theology
In a recent very thorough piece on ISIS for The Atlantic, Graeme Wood wrote: The reality is that the Islamic State is Islamic. Very Islamic. Yes, it has attracted psychopaths and adventure seekers, drawn largely from the disaffected populations of the Middle East and Europe. But the religion preached by its most ardent followers derives from coherent and even learned interpretations of Islam.

ISIS follows a very extreme form of Islam known as Salafism (in Arabic al salaf al salih means the “pious forefathers).” It promotes violence and bloodshed to establish and maintain hegemony through a very strict adherence to the qur’an and shari’a law.

ISIS also adheres to an apocalyptic theology and believes that the Mhadi or “guided one” will soon arrive and redeem Islam. According to them, Islam has been dead for over 1,000 years and was just reborn in 2014 when the global Caliphate was declared.
ISIS has boldly declared that Islam is not the religion of peace but the religion of the sword. They went to great length to explain what they meant in an article published in their magazine Dabiq. It really doesn’t matter what the rest of the world’s Muslim population believes, ISIS will continue to go for blood as long as they breathe because that is part of their apocalyptic “raison d’être”.

It is interesting that they include Jesus in their “end of the world” scenario as they see Him ultimately killing the Dajjal or Antichrist to bring in Islam as it always was intended. But until then, watch for the sword as it continues to swing through the infidels’ throats.

One the advantages of ISIS’s apocalyptic theology is that as bloody as it is, it is predictable. In the past, the Taliban, Al-Qaeda or even Hamas have been everything but predictable. If it was taken seriously, this could be to our advantage.

When does it end?
In America, a recent poll showed that 73% of Americans believe that the Obama administration doesn’t have a clear strategy to defeat ISIS (up 9% from 2014). President Obama called ISIS the Al-Qaeda “Junior Varsity”, clearly showing that he is clueless about the terrorist group. ISIS is an Islamic terrorist organization and it doesn’t matter if you believe that Islam is indeed the religion of peace because THEY DON’T!

On Monday, Mary Harf, A State Department spokeswoman proposed that we offer jobs to ISIS terrorists to pull them out of their misery and give them a sense of purpose. No wonder ISIS keeps humiliating the West and killing people. There is no solid leadership to take them out.

While our current president is struggling over semantics and a tactful approach, ISIS’s killing spree is growing exponentially. The days for a tactful approach are long gone (if they ever was such a time). It is time for a tactical approach and I am far from convinced that the United States will lead the free world in that endeavor. Don’t get too close to Israel though because the IDF doesn’t just bark, they bite too!