Home » Blog » Can a Biblical Zionist Love the Palestinians?
Spread the love 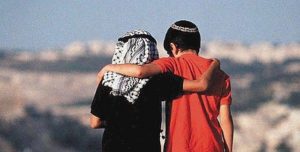 Whenever one puts biblical, Zionist and Palestinian in the same sentence, definitions are in order. Unity might never be fully achieved, but it should never be because of lack of clarity. First, what I mean by biblical is “in accordance with the biblical record” that as far as I understand includes the sixty-six books of the Bible, from Genesis to Revelation. As far as a fair definition of Zionism, lest I’d be accused of any bias as a Jew, I prefer to give a plain dictionary definition of the word as, “a movement for (originally) the re-establishment and (now) the development and protection of a Jewish nation in what is now Israel. It was established as a political organization in 1897 under Theodor Herzl, and was later led by Chaim Weizmann.”

Now, for the definition of who is a Palestinian, it gets a little tricky. Again, for the sake of clarity, I will say, “any physical descendant of the various Arab inhabitants of the Land of Israel known as Palestine prior to 1948.” While I do not believe that tracing the Palestinian people historically is possible, we must recognize that Arabs born in the Land of Israel when it was still known as Palestine are real people, not responsible for the conflict in which they were born. We must not forget that Palestine as a word was introduced by the Roman empire at the time of the Bar Kohba Revolt in AD 132 (A failed Jewish revolt against Rome.) To humiliate the Jewish people, Jerusalem was renamed Aelia Capitolina and Israel became known as Palaestina. Unfortunately, the word stuck and until 1948, “Palestine” was the word used to describe the geographical area that has always been known as Israel before. Eventually, under the leadership of Yassir Arafat and subsequent “Palestinian” leaders, the etymology of the word was expanded to mean both a land AND a people, a political claim that cannot be proven historically, archeologically, culturally or biblically.

Logically, we now need to look at what defines a “biblical Zionist.” We often hear the words “Christian” and “Zionist” put together to describe someone who would consider himself a follower of Yeshua (Jesus) and a supporter of Israel and the Jewish people’s right to the land. I prefer the term “biblical” to “Christian” as it pertains to those who love and support Israel.  Unfortunately, in the last few years, many people who call themselves Christians have displayed quite a bit of antisemitism and have supported faulty views like Replacement Theology or Christian Palestinianism. We also need to mention the recent upsurge of support for the Boycott, Divestment and Sanction (BDS) movement from several mainline Christian denominations.

The biblical Zionist position is usually taken as a result of one’s eschatological (End-Times) perspective and/or theological approach. Many evangelical Christians have supported Israel over the years, seeing that God is not finished with the Jewish people and has never fully fulfilled His promise given to Abraham and his descendants in Genesis 12:1-3. That same promise was ratified as a covenant known as the Abrahamic Covenant with a promise of a seed, a land and a blessing.  At the signing of the covenant made between God and Abram (Genesis 15:7-19,) no conditions were made, but specific land boundaries were given, that incidentally are much larger than current Eretz Yisrael. When God specifically gave Abram the boundaries of the land He was giving him, He simply stated,  “To your descendants, I have given this land.” When Abraham’s son Isaac settles in Gerar instead of moving to Egypt God repeats the promises of the Covenant He made with Abraham (Gen 26:1-4,) Sojourn in this land and I will be with you and bless you, for to you and to your descendants I will give all these lands, and I will establish the oath which I swore to your father Abraham. I will multiply your descendants as the stars of heaven, and will give your descendants all these lands; and by your descendants, all the nations of the earth shall be blessed.”
Furthermore, in Genesis 28:13-15, the Abrahamic Covenant is reconfirmed through Isaac’s son Jacob where the same land (vv. 13, 15) spoken of prior, is promised to Jacob and his descendants, as it was promised to Isaac before. It continues to be unconditionally given as we know through the biblical record that Jacob lied to his father about his birthright. Apparently, it was in God’s plan to have Jacob and not Esau inherit the blessings of the Abrahamic Covenant from Isaac. So biblically speaking, the descendants of Abraham, through Isaac and through Jacob can only be the Jewish people.

The biblical Zionist’s love for Israel and the Jewish people is a result of his understanding of the eternal, unconditional and unilateral Abrahamic Covenant and its three promises made that were later amplified in three other unconditional covenants known as the Land Covenant (Deuteronomy 29:1-30:20; Ezekiel 16:53-63,) the Davidic Covenant (II Samuel 7:11-16,) and the New Covenant (Jeremiah 31:31-34.)

But the great love that biblical Zionists display for Israel and the Jewish people should not be exclusive, and it should extend to all, even those who have been indoctrinated to hate and destroy Israel. In the words of Yeshua in Matthew 5:44, we read, “But I say to you, love your enemies and pray for those who persecute you. This absolutely doesn’t imply that all Palestinians today hate the Jews, as we should never paint with broad strokes. Yet, as difficult as it might be to fulfill that command, for those who take the Bible seriously, it is a command nonetheless.

So YES, a biblical Zionist not only can but should love the Palestinians.  Over the years, I have found that to love Israel one doesn’t have to hate the Palestinians, but sadly, the opposite is seldom true!