Home » Blog » Are We Learning Anything from Pittsburgh, Poway or Colleyville?
Spread the love 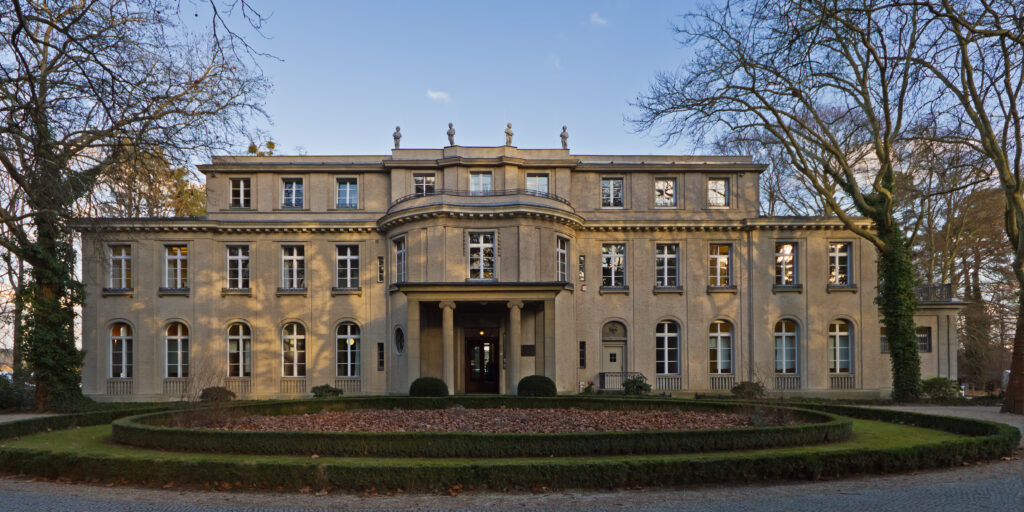 80 years ago this week, a handful of high-ranking Nazi officials gathered in the Berlin suburb of Wannsee for a conference during which they discussed the “Final Solution to the Jewish Question”.  This was the Nazi euphemism used to privately describe the systematic and deliberate attempt at destroying all European Jews. The various officials represented all the government agencies that were called to work together towards the nefarious goal that almost succeeded.

The conference was not the start of the annihilation of the European Jews. Most of its participants were aware of Nazi Germany’s efforts to mass murder Jews. The Einsatzgruppen had been working for about a year, but they were not efficient enough. Shooting Jews into mass graves that they had dug themselves was too slow for Hitler even though about a third of all the Jewish victims of the Holocaust were killed by mass shootings. The conference only lasted 90 minutes and out of it, a list of 11 million European Jews was drafted. There are very few surviving copies of the protocol document documenting the Conference.

Today, very few people remember, let alone know about the Wannsee Conference and the official implementation of the “Final Solution to the Jewish Question.” Ignorance, apathy or pure disdain are no excuses. If we continue to ignore the dark markers of history, eventually, they will disappear, and the next generation will think that they were just myths or propaganda with no factual truth. We cannot afford that, especially at a time when the weed of antisemitism is starting to regrow and thus choke our historical accuracy and make Jews into monsters again. We are always only one anti-Semite away from another tragedy. This was made clear in Colleyville, Texas, even if the outcome was a good one for all four hostages.

On Saturday, January 15, 2022, a hostage situation unraveled in Colleyville, Texas near Fort Worth. Pakistani UK citizen, Malik Faisal Akram entered Congregation Beth Israel during a live-streamed Shabbat service and took the Rabbi and three congregants hostage. The man claimed to be the brother of extremely dangerous terrorist Aalia Siddiqui, serving an 86-year sentence in a nearby Fort Worth prison.  He repeatedly requested her immediate release. It turned out that they were not related after all. By the end of the day after one of the hostages was first released, the Rabbi who had received FBI training helped the other two hostages escape shortly before the FBI raided the facility and shot Malik Faisal Akram.

This is one hostage story that ended well for all, and we ought to praise God for how swiftly the SWAT team intervened. Unfortunately, these do not always end well. Many will remember the 2015 “I Am Charlie” terrorist attack on French soil, culminating in the death of four Jewish hostages at the Paris Kosher Supermarket. Closer to home, we remember the 2018 deadly Pittsburgh Tree of Life synagogue shooting that killed eleven and wounded six (the deadliest attack on the Jewish community in America).  Then there was the Poway Chabad Synagogue in Southern California in 2019. One person was killed and three were injured.

It is important to look back and learn from the past, but as we all look forward, the questions remain. Can these tragedies happen again, and if yes, can anything be done to prevent them from happening?

Let me reiterate that we are just one antisemitic person away from the next tragedy. So, yes, we will most likely experience more of the same in the future, but this should not deter us from being involved in the fight against antisemitism. Three aspects of this fight need to be discussed: education, prayer and involvement.

Most news outlets, commentators and even scholars, usually comment on antisemitism from a secular viewpoint. The Jewish hatred is approached from different vantage points that are too often crippled by political correctness. Why was it so hard for the FBI representative in Colleyville to admit that a hostage situation in a Synagogue on Shabbat, to free antisemitic terrorist Aalia Siddiqui, was indeed an act of antisemitism? He was quoted saying “the issue was not specifically related to the Jewish community”. Regarding the same act of antisemitism, CAIR (Council on American Islamic Relations) was quick to whitewash the incident and refocus the public’s attention towards Aalia Siddiqui, painted as a martyr/victim.  I can appreciate their desire to protect the Muslim community from backlash because of what one man –who happened to be a Muslim–did, but we must be careful not to overcompensate. Eventually, the FBI had to back-pedal and admit that this was a clear case of antisemitism. The FBI Director finally admitted that it was “an act of terrorism targeting the Jewish community”.

Proper education is key here. Anytime we are swayed towards a biased narrative, our judgment becomes blurred, and our decisions are no longer based on facts, but on either the culture or a certain political agenda. That is dangerous. The fact that the Colleyville incident was not immediately labeled as an act of antisemitism, shows that, as a society, our values are shifting. For Christians, it should be clear that the culture should never dictate the Gospel, but rather the Gospel should punctuate the culture while being contextualized, but without compromise.

Jewish people, today more than ever, need to know that Christians have their backs. 2,000 years of antisemitism, many times by people whom the Jewish community believed to be Christians, is a lot of baggage for evangelicals today. Unfortunately, this is baggage that cannot be ignored or minimized, even though it might not be yours personally. If you are a Christian, it has been connected to you by the Jewish community. This baggage must be studied and understood if we want to be able to relate to our Jewish friends and earn the right to speak. Only then can we tell them what it means to be a Bible-believing follower of the Jewish Messiah.

Alongside education comes prayer. Truly, prayer needs to be at the foundation of all that we do as believers. Praying for the peace of Jerusalem (Psalm 122:6) is important, but this ought not be the only prayer for Israel and the Jewish people. We need to remember to pray for the safety of our Jewish friends and families, but also for their salvation (Romans 10:1).  Additionally, as believers, we are even challenged to love our enemies and pray for those who persecute us (Matthew 5:44).

We must also remember that the hatred for Israel and the Jewish people is not politically, geographically, culturally or even economically driven. It is a spiritual battle against Satan and those he chooses to use to hurt God by hurting the apple of His eye (Psalm 83:5; Zechariah 2:8b).  Satan is the creator of antisemitism and we should never underestimate his drive to destroy the Jews.

So, we learn, we pray and then we speak up, and not necessarily always in that order. Learning is a continual thing; prayer is always necessary and speaking up occurs whenever there is a reason to voice our support. Speaking up will go a long way in rebuilding bridges between Christians and Jews that have been burned over the last 2,000 years.

A simple phone call or email to your local synagogue or Jewish community center to voice your support to the Jewish people will mean a lot in times of trouble. Christians might even consider volunteering to repair or clean up damages on Jewish property because of acts of antisemitic vandalism. The Jewish community might decline the offer, but the offer will never go unnoticed.

For churches that have an outside marquee, it is very easy and quite effective to show support for the Jewish community relating to a tragedy such as a hostage situation or even a killing.

Even outside of a reaction to a tragedy, churches can always display a “Happy New Year to our Jewish friends” or “Happy Passover” or “Happy Hanukkah” at the appropriate time. This too, as simple as you think it is, will go a long way. If the Jewish community organizes a rally in support of Israel or to fight antisemitism, now is the time for Christians to participate and show their support.

Education, prayer, and involvement are not that complicated, but they take time, the right attitude of the heart and a desire to make a difference for God’s kingdom. Once we earn the trust of our Jewish friends, we have also earned the right to speak and the Gospel can move forward.

Let’s not wait for the next Pittsburg, Poway or Colleyville to react.  Rather, let’s be proactive and educate ourselves, pray and speak today! Antisemitism might never completely disappear on this side of eternity, but that should not discourage any of us from getting involved in fighting it.  Because when it comes to loving Israel and the Jewish people, we are on God’s side!