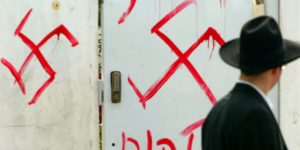 Another year is coming to an end, and as expected, it isn’t too difficult to find antisemitic events that can be used to punctuate the last twelve months amidst our global village. The Jewish people continue to be the “Scapegoats of Humanity,” while Israel is still painted as the colonialist invader of “Palestine.” One more year of propaganda is only hammering the peg of anti-Jewish sentiment deeper into the soil of our planet. In this first part of a two-part series are some highlights from January to June 2017.

JANUARY:  How can the UN both remember and ignore the Holocaust?
Every January 27, the international community remembers the Holocaust with International Holocaust Remembrance Day initiated in 2005 by the United Nations through UN Resolution A/RES/60/7. It is different from Yom Ha Shoah (Day of the Catastrophe) or Holocaust Remembrance Day that was initiated by David Ben Gurion in 1953 and takes place every year in Israel on the 27th of Nisan.

I am not sure why it took the international community 60 years to declare a day for Holocaust memory, especially in light of the death of more and more of the survivors in the last few decades and the push by many pseudo-historians to deny that it ever took place. Nevertheless, the UN recognizes the Holocaust. But there are two sides to that coin! United Nation’s webpage for the event has the following statement: “Denying historical facts, especially on such an important subject as the Holocaust, is just not acceptable. Nor is it acceptable to call for the elimination of any State or people. I would like to see this fundamental principle respected both in rhetoric and in practice by all the members of the international community”. (UN Secretary-General Ban Ki-moon.)

But when we look at the UN’s role in contemporary antisemitism and demonization of Israel, one wonders if it applies to current events?

FEBRUARY: Will Donald Trump Make America Great or Unsafe for Jews?
Along with Donald Trump’s victory came support from a variety of groups that carry a very negative reputation such as Neo-Nazi and Alt-Right groups. Mr. Trump never endorsed any of these fringe elements but his opponents made the connection for him, and before you knew it…Trump was the new Hitler. If I have to explain to anyone why Trump IS NOT even close to being like Hitler, they probably don’t deserve to be told. Trump isn’t a violent dictator, he isn’t a sociopath, he has no intention of disarming America and he isn’t obsessed with destroying all those who do not fit his ideal racial profile like homosexuals, handicapped people, Jehovah’s Witnesses and of course 6,000,000 Jews. Hitler was all that. Hitler was pure evil. Comparing Trump to Hitler isn’t demonizing Trump as much as it is exonerating Hitler for his actions.

In the meantime, many Jewish people in America are starting to feel uneasy. 57 Jewish Community Centers in more than twenty states have received bomb threats in the last month. Then there was the man who plastered a Chicago synagogue with swastikas and broke its window, and those who wrote antisemitic remarks such as “Jews belong in the oven” on NY subway windows.  Is Trump encouraging Jew haters to come out of their caves and spew their venom across America? Some really believe that, but I don’t believe that antisemites need to be prompted by a new president to come out and harass the Jewish community. They have done it long before him and will do it long after him.

MARCH: Switzerland strikes an unprecedented blow against BDS!
France–the one European country with both the largest Muslim AND Jewish communities–has also been involved in fighting BDS in the form of lawsuits against BDS activists. But what Switzerland just did was unprecedented. It was the first of all the European parliaments to pass a bill to prevent their country from financing organizations that clearly promote racism, antisemitism and BDS. In and of itself, this is a major breakthrough. In our age of over-reaching political correctness, it is a breath a fresh air to see a whole country stand against BDS, especially in Europe!What we shouldn’t miss in this bill is the fact that BDS is now bundled with racism and antisemitism equating the movement with the other two expressions of hatred. In essence, it claims that BDS is antisemitism, and it is!
The hypocrisy is obvious when you consider the fact that many other countries that have repeatedly violated human rights and are not even considered a threat.

APRIL: Ahead of his time, General Eisenhower was right about the Holocaust!
The voices of the Shoah are fading away, while the voices of historical revisionism are shouting that the Holocaust was either grossly exaggerated or simply didn’t happen. Its memory is in the hands of family members of Holocaust victims. But some people realized early on that the horrendous, organized genocide of the Jewish people had to be documented. One of these people was General Dwight Eisenhower.He caught the importance of documenting and remembering the Holocaust the minute that he walked into the camp at Orhdruf. As he visited this sub-camp of Buchenwald with Generals Bradley and Patton, he started to realize the magnitude of what he was witnessing and immediately wrote a letter to the head of the Joint Chiefs of Staff, General George Marshall in which he said: …I made the visit deliberately, in order to be in a position to give first-hand evidence of these things if ever, in the future, there develops a tendency to charge these allegations merely to “propaganda.” And yet, despite the commendable efforts made by Eisenhower and others, the Holocaust increasingly runs the risk of being relegated to some obscure corner of history, even worse…Some will soon believe that it simply never happened.

MAY: Do Jews Have a Future in France Under Emmanuel Macron?
Under Macron, we can expect political correctness to become the rule of law, especially as it pertains to radical Islam. We will probably soon see an influx of new migrants come to the “New France.” How will that affect the 500,000 French Jews, who have already started to immigrate to Israel in large numbers over the last five years? In the near future, it would appear that the Jews of France wouldn’t be at risk. After all, over 93% of French Israeli voted for him. But is it possible that they really voted against Le Pen instead?

JUNE: Will Nikki Haley Succeed in Reforming the UNHRC?
The United-Nations Human Rights Council is one of the many agencies borne out of the United Nations. They seek to defend human rights and yet they target Israel–a strong promoter and enforcer of human rights–as a violator. They buy into the Palestinian narrative on a regular basis. On June 9, 2017, during the opening of the 35th session of the UN Human Rights Council, Zeid Ra’ad Al Hussein, United Nations High Commissioner for Human Rights compared that Palestinians to Holocaust victims in a statement.

Ms. Haley boldly but not blindly came to the defense of Israel when saying: “According to Hillel Neuer of UN Watch, in its first decade (2006 to 2016), the council adopted 68 resolutions condemning Israel and 67 condemning the rest of the world’s countries combined.” She delineated the three reasons why she believed that the UNHRC is flawed: Bias against Israel, blatant double standards against Israel, and the fact that human rights abusers actually hold seats on the council. Her challenging the body of the UNHRC is courageous and necessary. It remains to be seen if the UNHRC can be reformed since many of its members are either Arab or Muslim countries that support the Palestinian narrative.

The second part of “Antisemitism in 2017: A Year in Review!” (July through December) will be published in the next few days.