You are here: Home / Antisemitism / Antifa joins BDS! What could possibly go wrong?
Spread the love 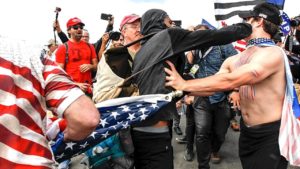 There is currently in America a political, social and racial polarization that is reaching levels of animosity never reached before. The source for this dramatic polarization is highly debated depending on what side of the fence you position yourself. Trump supporters blame the previous administration and democrats blame the new President. Regardless of who is to be blamed for the current wedge being forced into the American people, it is changing the fabric of America at a rapid pace, and it presents some serious risks to several minorities.

One group that has emerged around the time of Mr. Trump’s victory if not slightly before, was the group self-labelled as ” Antifa”,” an abbreviation for anti-fascist or anti-fascism. They seem to be reacting and protesting Trump’s every move and policy, labelling them as fascist at the core. They claim to fight racism, homophobia, sexism and capitalism. Antifa comprises people who would position themselves on the extreme Left, also known as Alt-Left.

Fascism became a real political influence in the early part of the 20th century in Europe. It was characterized by actions that reflected a rejection of communism, liberalism and anarchism. Fascism is a strange political bird that can somehow be found flying across the spectrum from left to right–always adhering to a more totalitarian approach to government. Fascism has been notorious for the use of violence on property and people for intimidation and control.

Then comes “Antifa” to protest fascism. They take the streets and speak up against the ills of such an ideology. After all, America’s Founding Fathers gave us all Free Speech, Freedom of the Press and Freedom of Religion, so it is perfectly acceptable to protest in America. The problem is that Antifa proponents are for the most part using methods of intimidation, silencing and protest that very strongly resemble the very methods they claim to oppose. They destroy property and use violence on people just like fascists. In their own way, they are becoming an Alt-Left brand of fascism. They use violence and intimidation which are the two main pillars of terrorism, and they should be labelled as such.

In some rare, cases “Antifa” proponents who claim to be fighting for equality, free speech and tolerance, might achieve it, even without much violence or verbal abuse. Unfortunately, when it comes to the Jewish community and/or Israel’s right to exist, they are are not helping. For a while now, the Left has increasingly distanced itself from support of Israel and helped push the Palestinian narrative. Antifa’s primary goal isn’t to hurt Israel, but there is a new trend on American university campuses linking Antifa with BDS (Boycott, Divestment, Sanctions). From the standpoint of protesting fascism, oppression and colonialism, Antifa and BDS seem to be on the same page, at least politically and ideologically, and again its really bad for the Jews.

Neo-Nazis and white supremacists are a clear danger for the Jewish community, so is Antifa. And now that we are starting to see Antifa teaming up with BDS proponents, the horizon is becoming gloomier for my Jewish people who once again in our history are being sandwiched between two groups who hate them. While Antifa and BDS might not seek a joint photo-op to declare their anti-Semitism, they do line-up ideologically. At a time in our history when anti-Semitism has morphed to a hungrier and angrier beast, we do not need to be sandwiched between the Alt-Left and the Alt-Right. We already have our hands full with radical Islam and some of the evangelical Church teaching Replacement Theology and Christian Palestinianism!

Really, when Antifa joins BDS…What could possibly go RIGHT for the Jews?