Home » Blog » Ahead of his time, General Eisenhower was right about the Holocaust!
Spread the love 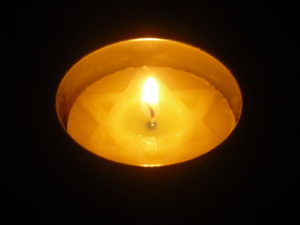 Depending on how one looks at it, the Holocaust took place ONLY seventy-five years ago or ALREADY seventy-five years ago. Within the scope of human history, it wasn’t a long time, but when we look at man’s lifespan, it helps us understand that almost all those who have gone through the horrors of the “Shoah” (catastrophe)  and survived it, are now gone, simply because of old age. Only a handful of firsthand survivors remain around us today, in their eighties and nineties. Very soon, nobody will be able to hold someone’s hand and turn their arm to discover the infamous tattoo of doom–the death number of the camps.

The voices of the Shoah are fading away, while the voices of historical revisionism are shouting that the Holocaust was either grossly exaggerated or simply didn’t happen. Its memory is in the hands of family members of Holocaust victims. That is why I continue to tell the story of how my mother was hidden in the South of France after her father was taken by the Gestapo and sent to his death in Auschwitz. But some people realized early on that the horrendous, organized genocide of the Jewish people had to be documented. One of these people was General Dwight Eisenhower

He caught the importance of documenting and remembering the Holocaust the minute that he walked inside the camp at Orhdruf. As he visited this sub-camp of Buchenwald with Generals Bradley and Patton, he started to realize the magnitude of what he was witnessing and immediately wrote a letter to the head of the Joint Chiefs of Staff, General George Marshall in which he said: …The things I saw beggar description. While I was touring the camp I encountered three men who had been inmates and by one ruse or another had made their escape. I interviewed them through an interpreter. The visual evidence and the verbal testimony of starvation, cruelty and bestiality were so overpowering as to leave me a bit sick….I made the visit deliberately, in order to be in a position to give first-hand evidence of these things if ever, in the future, there develops a tendency to charge these allegations merely to “propaganda.”

And yet, despite the commendable efforts made by Eisenhower and others, the Holocaust increasingly runs the risk of being relegated into some obscure corner of history, even worse…Some will soon believe that it simply never happened. This is also why part of the process was for the US military to force as many germans as possible to witness the horrors that had taken place around them. Perpetrators and by-standers alike were faced with the results of evil in their midst.

General Eisenhower would be very angry and probably disgusted by today’s younger generation. Their lack of interest and/or lack of knowledge of the Jewish catastrophe is helping those who wish to make it disappear from history. Some schools barely touch the subject in fear of hurting the feelings of other people groups. In the meantime, the Shoah is slowly being erased one person at a time, one memory at a time, one testimony at a time.

It seems to only be when it comes to the Holocaust that people come out of nowhere with a pseudo-scholarly approach to the Jewish tragedy. People like David Irving, Louis Faurisson, Roger Garaudy, Louis Farrakhan, Jean Marie Le Pen or Bobby Fisher are just a few names in the pantheon of antisemitism and Holocaust denial. It appears to be such an obsession for these men (and many more) to prove that the Jewish catastrophe was a hoax.

On the other hand, very few people, if any, are interested in writing books trying to play down or deny events such as the Sudanese mass killings, the war in Kosovo, the Armenian genocide or even the Stalin massacres.  All these tragedies (and so many more throughout history) were responsible for the death of millions of innocent people. When one evaluates the level of interest in denying the Holocaust as opposed to any other genocide, there is a flagrant imbalance.

This why on the 28th of Nisan (April 23, 2017), Jewish people around the world remember the Holocaust as they observe Yom HaShoah (The Day of the Catastrophe). This day of remembrance was inaugurated by Israel’s Prime Minister David Ben Gourion in 1953. At 10:00 AM local time in Israel, sirens sound and everything comes to a halt, including motorists stepping out of their vehicles for two minutes of silence.

These symbolic two minutes of silence serve to remind us of the millions of innocent lives who were forever silenced. We cannot afford not to mark this event each year and we cannot afford not to teach it in schools, universities and within our own circles of influence. We are the voice of remembrance for all those who cannot speak up anymore, like my maternal grandfather Maurice Weinzveig.