You are here: Home / Antisemitism / A Battle Won, A War Still Being Fought!
Spread the love

I am pleased to report that the Egyptian culture minister Faruq Hosni was defeated 27/31 yesterday at the UNESCO second vote for their new Director General. Bulgarian diplomat Irina Bokova was elected instead. Somehow, the people listened to the concerns, complaints and petitions against Mr. Hosni and his anti-Semitic stance.

Mr. Hosni was apparently unjustly accused of anti-Semitism and had personally apologized to some Jewish leaders, including French Holocaust researcher Serge Karlsfeld, about his vitriolic remarks.
I find it interesting that the minute he lost the vote, he blamed the whole defeat on a worldwide “Jewish Conspiracy” based in New York. (read more here). Hmmmmm!? looks to me like it is a good thing that he did not get in after all!
A small battle was won with Mr. Hosni’s defeat, while a larger one is about to take place in our nation’s capital.
Tomorrow, Friday September 25 will be a very special day for Muslims in America as an estimated 50,000 of them will gather in Washington D.C. on Capitol Hill for “Jummah Prayer (Friday prayer) on Capitol Hill.
This event is advertised on a special website at www.islamoncapitolhill.com as a peaceful prayer gathering of Muslim as per their site: 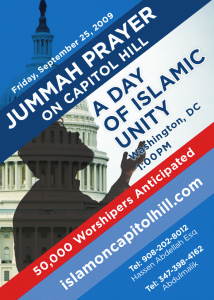 We have seen many groups, religious or not, gather in our nation’s capital for various reasons. that, in and of itself, is the beauty of the freedom we have in our great country.
Why is this gathering any different?
Well, I cannot say for sure if the agenda will be different from what is advertised on the website, but a little research on the two imams who will be reciting the prayers from the Qur’an, will uncover quite a different story that the one they listed on their credentials.
Note their motto: OUR TIME HAS COME!
PEACEFUL RELIGION?….NOT SO FAST!!!! 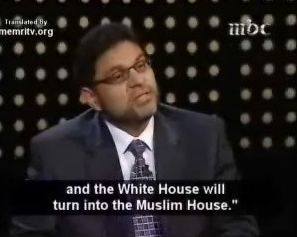 Sheikh Ahmed Dewidar, one of the two leaders for the event , is advertised as standing shoulder to shoulder with President George W.
Bush at Ground Zero after the events of 9/11. In an interview, the same man also claimed that ” The Jews” were responsible for the events of 9/11
Additionally, Mr. Dewidar was also quoted on TV saying that one day the white house would be a muslim house.
The other Imam, Muhammad Al Hussayn Jebril, has some connections with a Carolina mosque harboring Jihadists.
It remains to be seen what exactly will come from this Muslim gathering. I have serious doubts about any positive, tolerant and loving outcome when I see the leadership involved. Additionally, a careful study of their website’s logo shows a page of the Qur’an juxtaposed next to our constitution. Is it me, or the right side (Muslim page) is slightly wider than the left side (US constitution)? 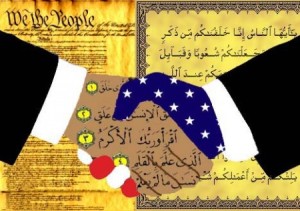 This being said, tomorrow is the ideal setting for the followers of Yeshua (Jesus) to take time in their day (around noon EST), and pray for the many Muslims gathering on Capitol Hill. Pray that they would supernaturally meet Yeshua. Pray that they would renounce Islam and the false and hateful teachings of the Qur’an.
PRAY, PRAY, PRAY but don’t forget to LOVE!
…and remember the words of Yeshua (Jesus)
“ You have heard that it was said, ‘ YOU SHALL LOVE YOUR NEIGHBOR, and hate your enemy.’ “But I say to you, love your enemies, and pray for those who persecute you” Matthew 5:43-44
Help Us by Sharing