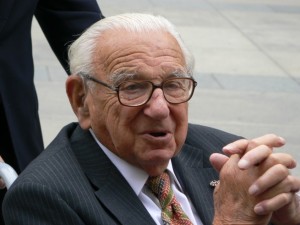 As I am committed to expose, educate and equip people to fight anti-Semitism, it is not very often that I uncover stories that are actually worth telling and uplifting. Those who have left a positive legacy in history are few and far in between and they almost always never make the news. For this very reason, the recent passing of Sir Nicholas Winton at age 106 deserves our attention.

Nicholas Wertheim was born of German Jewish parents in 1909. They had changed their names to Winton after moving from Germany to England. Faith and/or safety were usually the two main reasons why Jewish people changed their names to a more “Christian” sounding one, facilitating their assimilation into their newfound community.

Sir Nicholas Winton (knighted by Queen Elizabeth II in 2002) was just a regular young man learning to become a bank broker when he decided to take a two-week vacation in the fall of 1938. Originally wanting to go to Switzerland, he ended-up going to Prague. His life would be changed forever and so was the life of 669 Jewish children destined for annihilation in the camps, as Winton decided to help a friend who was involved in Jewish refugee work. This all started on the eve World War Two and around the time of Kristallnacht. Nazi Germany had already put its grip on Western Europe and was organizing for the infamous “Final Solution to the Jewish Question”– a euphemism for the Holocaust.

What followed was a series of events that led to the safe passage of 669 Jewish kids over a period of time. They became known as “Winton’s Children” and also as part of the “Czech Kindertransport.” It was his responsibility to find homes for all the children in England, and this is just what he did with the help of his mother. He later became known as the “British Schindler” in reference to Oskar Schindler who saved over 1,000 from their deaths in the camps during the Holocaust. Sir Winton also sent a letter to President Roosevelt for more children to be taken but received a response telling him that the United States couldn’t help.

Yet, Sir Nicholas Winton’s feat of heroism might have remained a secret to all if it wasn’t for his wife discovering documents in their attic. He had kept a list of most of the children who had received safe passage. That list had been relegated to the storage area of their home for almost 50 years; probably tucked away between old furniture, picture frames and other unused items. Winton was originally not interested in sharing his story and until his last day, insisted that he wasn’t a hero because he never really risked his life. He was surprised on a British TV show in 1988 when much of the audience sitting around him consisted of people he had saved. His story was also featured on 60 minutes.

Sir Nicholas Winton was very much a hero, even if he didn’t want to be called one, and he did indeed risk his life more than he knew. He was a hero because he cared about others who couldn’t help themselves and he went out of his way to facilitate their transport. But he was also a hero because he chose to remain quiet about his feat. His humility and courage are what makes his heroism. Was God directing his path?

I find it fascinating that Sir Winton’s parents had become followers of Yeshua the Messiah soon after their arrival to England. It is in this “Christian” setting that young Nicholas was raised, undoubtedly affected by the ethics and integrity of his parents newfound faith. This was a time when most “Christians” didn’t regard Jews with favor. Of course many will argue about Sir Winton, wondering if he was a Christian or a Jew, but at the end of the day do you think that the 669 people he saved cared even the slightest? I certainly don’t think so!

Sir Winton personified and exemplified the biblical model of unconditional and compassionate love taught by Yeshua Himself. Because of his decision to help a few, “Winton’s Children” and their descendants number about 15,000 today.
There were just a few like Corrie Ten Boom, Raoul Wallenberg, Pasteur Trocmé and Oskar Schindler. Sir Winton belongs to that group of men and women who saw no reason that could impede them from helping their fellow men in need.

Who said that one person couldn’t make a difference?

So long Nicholas Wertheim and may you rest in peace.

And whoever saves a life, it is considered as if he saved an entire world.